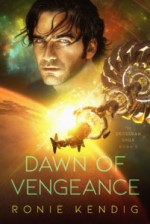 A haunting prophecy upended his identity. Now it demands his life.

Once a formidable bounty hunter, Marco Dusan is plagued by insecurity as he tours the realm he now rules. This quiet, backwater planet is not as untouched as he’d once thought. Evidence of collusion between Droseran factions and the powerful Symmachians with their forbidden technology litters his encounters. Worse, all signs indicate Xisya, the alien who tortured him, is still snatching Kynigos Brethren—but to what end?

Lance Corporal Eija Zacdari works hard to win a coveted place on the Symmachian hyperjump program, but instinct tells her their intel is flawed. Despite nearly failing the tests, she is assigned to the team-and lands in the middle of a bewildering conspiracy.

Haunted by a prophecy that promises pain and war, Marco forges alliances to protect the primitive world against Symmachia’s devastating influence. But one truth becomes painfully clear: the biggest threat to their world may be much, much closer to home.

This is the second in a series and the first one, Brand of Light, must be read first to appreciate the characters and their interactions in this one. You can read my review of Brand of Light here.

The first novel in the series had many more space flight adventures and battles. This novel deals much more with brothers bickering and discussions and posing between characters and people groups. There is some action but it is interspersed with long scenes of relationship interaction. There is much more internal thinking and struggles in this novel than in the first one. Some of it seemed repetitive, such as the interactions between Kersei and Darius and definitely the conflict between Marco and Darius.

Kendig also uses a mix of English words and made up words. Warriors are aerios and regia, I think. Marriage is binding. An aetos is a bird, I think. A sergius is a servant, plural, sergii, I think. Adunatos in this novel is something revealed through a person's eyes and touch. The word is actually a Greek adjective used in the Bible. And uncommon words are used, like fetor for a strong foul smell. Yes, it is a regular English word but not a well known one. I found the use of a few made up words distracting.

Kendig's writing style is such that “light exploded” when a door opened and the light was “eclipsed” when a person walked through the door. (Loc 4739/8019) And then, “confused” irises. (Loc 6243/8019) Irises could reflect the person's confusion but are not themselves capable of being confused. Writing like that made me stop and read it over a couple of times.

The novel is experienced from the universal or narrative point of view. The character focus changes frequently as we experience the action and thoughts of Marcos and then, with a division mark, the thoughts and experiences of Isaura, then Kersei. The spiritual aspect of the novel is limited. An Ancient is mentioned as a divine being but that is not so much different from the Ladies, the deity honored on several planets. (Loc 6666/8019)

I grew up on science fiction and was looking forward to this series. While some really appreciate the plot and writing style of this novel, they are not my favorite.

Ronie Kendig is an award-winning, bestselling author of over twenty titles. An Army brat, Ronie lives a short train ride from New York City with her husband, twin sons, and two fur-sons, VVolt N629, a retired military working dog, and Benning the Stealth Golden. Described as an empath by her literary agent, Ronie has used her degree in psychology to write books that have won the coveted Christy Award, RomanticTimes Reviewers’ Choice Award, The Realm Award, HOLT Medallion Award, and more. Her books have also hit the CBA Bestseller List multiple times.

Throughout the Droseran Saga, Marco Dusan—our much-loved hero—enjoys his favorite drink, warmed Cordi. The inspiration for his citrusy-spiced drink came from a favorite family holiday tradition—“Christmas punch.” My mother-in-law received this recipe while they were stationed in Germany from a colonel’s wife. We make this every Christmas (okay, I make it a lot starting in about late October because it’s so delish). The piquant scent of cranberry, cloves, and orange fills our home every fall and holiday.

The scent of this is apropos for Marco, who tracks by scent. And, interestingly, our noses and smells are connected to memories, which just seemed to demand I come up with some way to create “Marco’s Cordi” for readers. So, this year, I used Adagio Tea’s custom-blend feature to craft a more citrusy blend of Marco’s drink. Now, that’s tea—something Marco doesn’t really enjoy—but add a quarter cup of warmed orange juice, and you’re starting to hit the sweet spot. Marco would be proud!

Where Faith and Books Meet, December 16

For Him and My Family, December 20

Because I said so -- and other adventures in Parenting, December 21

Adventures of a Travelers Wife, December 21

Through the Fire Blogs, December 22

Inside the Wong Mind, December 24

I also found it a bit confusing having several characters with the same first letter in book one.