The Magdalene Reliquary by Gary McAvoy 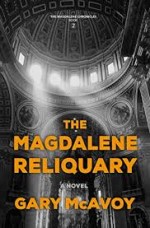 McAvoy gives readers another informative and entertaining novel. It is the second in a series but contains enough back story that it can be read and understood well on its own. You can read my review of the first in the series, The Magdalene Deception, here.

McAvoy does a great job of weaving a fictional narrative around a combination of actual historical events and speculative legends. This novel explores the Cathars and a possible treasure hidden for centuries. A young Jesuit priest discovers a possible clue to the location of the hidden treasure and the adventure is on.

There is much attention to detail in this series as we are taken to many locations in the Vatican and elsewhere. There are many characters too, such as shady antiquities dealers and Catholic priests vying for power. The description of the Secret Archives in the Vatican made me aware of the vast number of documents contained there. Some have never been reviewed and I wonder what secrets they hold.

One of my pet peeves is a character acting stupidly as a way to bring on suspense. Dominic, the Jesuit priest, does so. First he openly shows off, in a public place, the clue he found. Then he freely carries it around in his backpack while he walks the streets of Rome by himself. Is it any wonder he is attacked, precipitating much of the ensuing suspense?

Other than that one complaint of mine, I found the novel to be very engaging. The characters are well crafted. The plot retained my interest. Unfortunately, the egalley I read did not contain an author's note on which parts of the novel are based on actual historical events and which are McAvoy's imagination. We are given a teasing bit of history at the end of the book so I'll be looking for the next novel in this series.

Gary McAvoy is a veteran technology executive, entrepreneur, and author of And Every Word is True, a sequel to Truman Capote's book In Cold Blood. The Magdalene Reliquary in his second novel in the series called The Magdalene Chronicles. You can find out more at https://www.garymcavoy.com/.

Posted by Joan Nienhuis at 1:42 PM