The Dress Shop on King Street by Ashley Clark 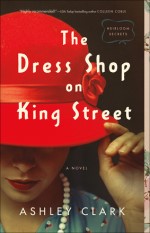 In 1946, Millie Middleton left home to keep her heritage hidden, carrying the dream of owning a dress store. Decades later, when Harper Dupree's future in fashion falls apart, she visits her mentor Millie. As the revelation of a family secret leads them to Charleston and a rare opportunity, can they overcome doubts and failures for a chance at their dreams?

I appreciate the social issues explored in this dual time novel. The earlier time in the U.S., 1946, was a time when mixed marriages were not accepted. The children of such a marriage would have difficulty fitting into society, white or Black. Clark has done a good job of giving us a sense of the difficulties of the time without any gruesome scenes.

The narrative alternates between 1946 and the years after and the current day. I felt the prologue a bit unnecessary and would have preferred that information included in backstory presented early in the book. I was also a little unclear about the missing generation, between Peter and Millie. And Millie's mother seemed absent so I was a bit surprised when she appeared later on in the book as if she had been there all along.

There is good historical detail. I loved the descriptions of architecture and fashions of the day. I was a bit surprised with the Charleston historical buildings as I thought much of the city was destroyed in the Civil War and the 1865 earthquake. I would have liked to know a bit more about that aspect of Peter's work, such as which parts of the city survived. I really appreciate the historical note Clark adds at the end of the book, identifying the factual details of the human side of the story.

This is a good novel about women who have had their dreams dashed. It is also good for readers who like to express themselves through creative endeavors, in this case sewing. There is a good budding romance included and a good spiritual message of hope in God.

Ashley Clark writes romantic women's fiction set in the South. This is her debut novel. She has a master's degree in creative writing and teaches literature and writing at the University of West Florida. She is a member of American Christian Fiction Writers. She lives with her husband and son off Florida's Gulf Coast. You can find out more at www.ashleyclarkbooks.com.