A Scone of Contention by Lucy Burdette 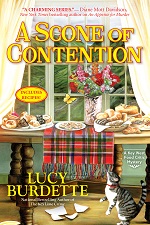 This is the first novel I have read in this series and felt it was good on its own. The female amateur sleuth writes a column on food so readers who love descriptions of food and recipes included will like this book. Most of the book takes place in Scotland so there is really lots of information about their characteristic food. There is also much about various locations, customs, celebrations, and history of a number of interesting places in Scotland. I had not heard of the Falkirk Wheel, for example, and found it an interesting feature to which Burdette introduced me. The Kelpies, the huge horse-head sculptures were pretty interesting too.

There was one odd and wrong scientific fact in the novel. The festival of the summer solstice is being described. It is the longest day of the year and “the moment when the sun is closest to the earth”, a character says. (1628/3895) Not true. A quick search will show that perihelion, the point where the earth's orbit is closest to the sun, is generally about two weeks after the winter solstice in the Northern Hemisphere. Oops.

Scientific error aside, this is an entertaining cozy mystery with lots of mouth watering descriptions of food and interesting accounts of various places in Scotland. The mystery is sufficient but I found the food and setting much more engaging.

Lucy Burdette is the author of the popular Key West Food Critic mysteries series. She has also published mysteries under her alter-ego, clinical psychologist Roberta Isleib. Her books have been shortlisted for a number of awards. She is a member of Mystery Writers of America and Sisters in Crime, and a past president of the latter. Photo: Duke Morse.

Posted by Joan Nienhuis at 9:55 AM