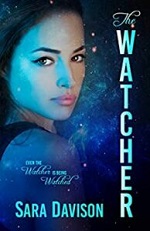 Someone or something is watching Kathryn Ellison.

Kathryn thought she had buried memories of That Night for good—until Nick Lawson returns, reigniting her long-suppressed feelings for him. Seeing Nick has always reminded her too much of the horrible night that changed her life. As much as she wants to be with him, she wants even more to forget. When Nick unexpectedly shows up at her family ranch, Kathryn knows it is finally time to let go of the traumatic past that has held her captive for so long.

David Henley is a captive too—of the dark secret involving Kathryn, a secret he’s kept even from his wife. Now the truth is about to be revealed. And when it is, he could be stripped of everything in his life that matters to him.

A storm is brewing in the spiritual realm, and its effects reverberate through the natural world, summoning otherworldly Beings to the ranch. While Kathryn confronts the memories of That Night and struggles to let them go, she is not as alone in her home as she thinks.

As spiritual and temporal forces collide, Kathryn—and everyone she loves—is about to be caught in the crossfire.

First off, readers should know that this novel has a flash back scene that could be a trigger situation for readers who have experienced sexual assault. That out of the way, I found this to be a very interesting novel. The point of view is unique as it is that of an angel, I think. I am a little unsure that the being is an angel because it is described as being immortal and omnipresent. (4944/6319) Generally, those are attributes ascribed only to God. Yet God is elsewhere referenced as “He” by this being (4988/6319) so I am going to conclude the narrator is an angel. I was further confused as the being was said to not be able to move physical things, like letters on a kitchen counter, yet worried about getting hit on the backside by a door and had rain splash on its head. (5415/6319, 5705/6319)

While the description of the narrator was inconsistent, I found the personification of emotions and other characteristics as spiritual beings very interesting. For example, “Pain is an interesting Being.” (4378/6319) And, “Justice is an intimidating Being.” (4472/6319) Capitalization aside as it is usually reserved for deity, it is interesting to think about spiritual beings influencing people to feel pain or to exercise justice. I liked Determination being described as a being perpetually covered in grit. (2553/6319) That's clever writing.

There are several spiritual issues explored in this novel. One is a faith issue of doing what God has called you to do and yet experiencing something terrible. Another issue is honesty. We are confronted with a redeemed man not telling his wife nor the church where he is called to pastor about his previous, sinful life. He pays the price of eventually having to bare all anyway.

I found this novel to be a very interesting one, exploring tragedy, redemption and grace from a unique point of view. If readers can overlook some issues, such as I've described above and a pet peeve of mine, starting a chapter with a dream, this is an entertaining and thought provoking novel.

Sara Davison is the author of three romantic suspense series—The Seven Trilogy, The Night Guardians, and The Rose Tattoo Trilogy, as well as the standalone, The Watcher. She has been a finalist for more than a dozen national writing awards, including Best New Canadian Christian author, a Carol, two Selahs, a Holt Medallion, and three Daphne du Maurier Awards for Excellence in Mystery/Suspense. She is a Word and Cascade Award winner. She currently resides in Ontario, Canada with her husband Michael and their three children. The words on the mug she uses every morning pretty much sum up her life—I just want to sleep, drink coffee, and make stuff up. Get to know Sara better at www.saradavison.org and @sarajdavison.

The Watcher has taken me on an incredible journey over the last decade. After obtaining my degree in English literature, I longed to write a book. However, I found the idea of sitting down and actually writing one extremely daunting. So, I took every creative writing course, read every book on the subject, and attended every writing conference and seminar I could fine—basically doing everything except writing. Then one Easter Sunday morning, in church, the idea for an entire book—beginning, middle, ending, characters—came to me. Over the next five years, I wrote, rewrote, edited, polished, and got feedback on the book, until I felt it was nearly ready to submit to a publishing contest.

I say nearly because, while the feedback I had received was largely positive, it was still clear that something was missing. A month before the deadline to submit to the publishing contest, it occurred to me what that something was—the timeline. The novel read a bit like a sweeping epic novel that took place over twenty years. While that might work in some genres, it doesn’t play well in romantic suspense.

I had always been intrigued by the idea of a non-human narrator, and it occurred to me that could work with this book. That led me to the idea of using The Watcher, an unseen being in the spiritual realm, as my narrator. When I added in that being and numerous other beings, I was able to shorten the timeline of the book from twenty years to six days.

Of course, this required a major overhaul of the book. I closeted myself in my office for a month, only completing the story the day before the deadline for the contest. That meant I didn’t have an opportunity to show it to anyone or get feedback, so I had no idea whether the idea worked or if the story even made sense anymore.

The Watcher ended up winning the contest and was published in 2011. A decade and eight other published novels later, I got back the rights to my debut novel, polished it up, added several more chapters, and re-released it through Mountain Brook Ink in 2021.

As my first novel, my only (so-far) standalone, and the sole novel I have released that is speculative romantic suspense as opposed to contemporary romantic suspense, The Watcher holds a special place in my heart. As with all my books, my hope and prayer is that it will touch readers’ hearts and draw them closer to the God who has promised to never leave them or forsake them.

By the Book, September 17

For Him and My Family, September 21

The Meanderings of a Bookworm, September 24

Because I said so -- and other adventures in Parenting, September 29

I received a complimentary digital copy of this book through Celebrate Lit. My comments are an independent and honest review. The rest of the copy of this post was provided by Celebrate Lit.
(My star ratings: 5-I love it, 4-I like it, 3-It's OK, 2-I don't like it, 1-I hate it.)
Posted by Joan Nienhuis at 5:31 AM

Wow, this book sounds very intriguing and I love the book cover, thank you so much for sharing about it, I will be adding it to my TBR list. Have a great rest of the week and stay safe. aliciabhaney(at)sbcglobal(dot)net

Thank you for sharing your review of this story and the book and author details, it sounds like a good read

I'm on the edge on my seat with this thrilling story.

Sounds interesting, thanks for sharing!

Joan, Thank you for sharing your wonderful review! Sounds like a page-turner.

This sounds like a story that will stick with you for a long time.

What inspires your main character ideas?