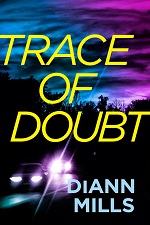 Fifteen years ago, Shelby Pearce confessed to murdering her brother-in-law and was sent to prison. Now she’s out on parole and looking for a fresh start in the small town of Valleysburg, Texas. But starting over won’t be easy for an ex-con.

FBI Special Agent Denton McClure was a rookie fresh out of Quantico when he was first assigned the Pearce case. He’s always believed Shelby embezzled five hundred thousand dollars from her brother-in-law’s account. So he’s going undercover to befriend Shelby, track down the missing money, and finally crack this case.

But as Denton gets closer to Shelby, he begins to have a trace of doubt about her guilt. Someone has Shelby in their crosshairs. It’s up to Denton to stop them before they silence Shelby—and the truth—forever.

Praise for Trace of Doubt:

"Well-researched... with some surprising twists along the way. In Trace of Doubt, Mills weaves together a tale of faith, intrigue, and suspense that her fans are sure to enjoy." – STEVEN JAMES, award-winning author of SYNAPSE and EVERY WICKED MAN

“Trace of Doubt is a suspense reader’s best friend. From page one until the end, the action is intense and the storyline keeps you guessing.” – EVA MARIE EVERSON, bestselling author of FIVE BRIDES and DUST

Mills really captured the troubles a person has when newly released from prison. The difficulties a parolee experiences in reentering society are daunting. I admired the people who gave her a chance and was totally disappointed with the people who showed such prejudice, holding her past over her, especially the church people. The message about judging was clear and not subtle at all.

The characters Mills crafted were a bit puzzling to me. I bordered on disbelief about how dedicated Shelby was to her sister. Shelby developed a stronger character while in prison yet remained clueless in evaluating her sister. I found it interesting that, even in the end, the behavior of Shelby's sister remained a mystery to her. (4949/5045) Shelby's thoughts did not give me confidence that we readers were supposed to understand the behavior either. Family loyalty would be a good topic for discussion at a reading group, as would questions about childhood influences on adult behavior.

The resolution to the complex plot was quick and felt a little unreasonable, the cavalry coming over the hill to the rescue kind of ending. I thought Shelby was crafted to be a strong person and I would have preferred her having an active part in the final action.

This mystery has lots of suspense woven around family relationships. It includes a very strong Christian faith message. Even though I felt there were some character and plot defects in the novel, I do like Mills' writing and will be looking for her next book.

Would I ever learn? I’d spent too many years looking out for someone else, and here I was doing the same thing again. Holly had disappeared after I sent her to the rear pantry for potatoes. She’d been gone long enough to plant and dig them up. I needed to get those potatoes boiling to feed hungry stomachs.

I left the kitchen to find her. The hallway to the pantry needed better lighting or maybe fewer corners. In any event, uneasiness swirled around me like a dust storm.

A plea to stop met my ears. I raced to the rear pantry fearing what I’d find.

Four women circled Holly. One held her arms behind her back, and the other three took turns punching her small body. My stomach tightened. I’d been in her shoes, and I’d do anything to stop the women from beating her.

“Please, stop,” Holly said through a raspy breath. For one who was eighteen years old, she looked fifteen.

“Hey, what’s going on?” I forced my voice to rise above my fear of them.

I’d run into this woman before, and she had a mean streak. “What’s she done to you?” I eyed the woman.

“None of your business unless you want the same.”

“It’s okay, Shelby. I can handle this.” Holly’s courageous words would only earn her another fist to her battered face.

“Enough!” I drew my fists and stepped nose to nose with the leader.

The four turned on me. I’d lived through their beatings before, and I would again. I fell and the kicks to my ribs told me a few would be broken.

A whistle blew, and prison guards stopped the gang from delivering any more blows to Holly or me. They clamped cuffs on the four and left Holly and me on the floor with reassurance help was on its way.

I’d been her age once and forced to grow up fast. No one had counseled me but hard knocks, securing an education, and letting Jesus pave the way. I’d vowed to keep my eyes and ears open for others less fortunate.

Holly’s lip dripped blood and a huge lump formed on the side of her head. I crawled to her. “Are you okay?”

“Not sure. Thank you for standing up for me. I thought they would kill me. Why do they do this? I’ve never done a thing to them.”

“Because they can. They want to exert power, control. Stick by me, and I’ll do my best to keep you safe.”

I tightened my grip on the black trash bag slung over my shoulder containing my personal belongings—parole papers, a denim shoulder bag from high school, a ragged backpack, fifty dollars gate money, my driver’s license at age sixteen, and the clothes I’d worn to prison fifteen years ago.

The bus slowed to pick me up outside the prison gates, its windshield wipers keeping pace with the downpour. The rain splattered the flat ground in a steady cadence like a drum leading a prisoner to execution. I stepped back to avoid the splash of muddy water from the front tires dipping into a pothole. Air brakes breathed in and out, a massive beast taking respite from its life labors.

The door hissed open. At the top of the steps, a balding driver took my ticket, no doubt recognizing the prison’s release of a for- mer inmate. He must have been accustomed to weary souls who’d paid their debts to society. The coldness glaring from his graphite eyes told me he wagered I’d be locked up again within a year. Maybe less. I couldn’t blame him. The reoffend stats for female convicts like me soared high.

For too many years, I imagined the day I left prison would be bathed in sunlight. I’d be enveloped in welcoming arms and hear encouraging words from my family.

I moved to the rear of the bus, past a handful of people, and found a seat by myself. All around me were those engrossed in their devices. My life had been frozen in time, and now that I had permission to thaw, the world had changed. Was I ready for the fear digging its claws into my heart?

The cloudy view through the water-streaked window added to my doubts about the future. I’d memorized the prison rules, even prayed through them, and now I feared breaking one unknowingly.

The last time I’d breathed free air, riding the bus was a social gathering—in my case, a school bus. Kids chatted and laughter rose above the hum of tires. Now an eerie silence had descended.

I hadn’t been alone then.

My mind drifted back to high school days, when the future rested on maintaining a 4.0 average and planning the next party. Maintaining my grades took a fraction of time, while my mind schemed forbidden fun. I’d dreamed of attending college and exploring the world on my terms.

Rebellion held bold colors, like a kaleidoscope shrouded in black light. The more I shocked others, the more I plotted something darker. My choices often seemed a means of expressing my creativity. While in my youth I viewed life as a cynic. By the time I was able to see a reflection of my brokenness and vowed to change, no one trusted me.

Before I took the blame for murdering my brother-in-law. Before I traded my high school diploma and a career in interior design for a locked cell.

Before I spent years searching for answers.

Before I found new meaning and purpose.

How easy it would be to give in to a dismal, gray future when I longed for blue skies. I had to prove the odds against me were wrong.

Check Out This Fab Trailer for Trace of Doubt:

DiAnn Mills is a bestselling author who believes her readers should expect an adventure. She combines unforgettable characters with unpredictable plots to create action-packed, suspense-filled novels. DiAnn believes every breath of life is someone’s story, so why not capture those moments and create a thrilling adventure?

Her titles have appeared on the CBA and ECPA bestseller lists; won two Christy Awards; and been finalists for the RITA, Daphne Du Maurier, Inspirational Readers’ Choice, and Carol award contests.

DiAnn is a founding board member of the American Christian Fiction Writers, a former director of Blue Ridge Christian Writers, and a member of Advanced Writers and Speakers Association, Mystery Writers of America, Sisters in Crime, and International Thriller Writers. She shares her passion for helping other writers be successful by teaching writing workshops around the country.

DiAnn has been termed a coffee snob and roasts her own coffee beans. She’s an avid reader, loves to cook, and believes her grandchildren are the smartest kids in the universe. She and her husband live in sunny Houston, Texas.

I received a complimentary egalley of this book through Partners in Crime Virtual Book Tours. My comments are an independent and honest review. The rest of the copy of this post was provided by Partners in Crime Virtual Book Tours.
(My star ratings: 5-I love it, 4-I like it, 3-It's OK, 2-I don't like it, 1-I hate it.)
Posted by Joan Nienhuis at 5:58 AM

Thanks for the review. I am just starting this one myself.

Thank you for hosting me today and for the review!

I am starting this one soon!