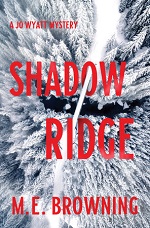 I enjoyed this police procedure novel and my introduction to Browning. Jo Wyatt is quite the detective. I had a hard time liking her. She's got quite a sarcastic and critical mouth. She has an attitude and serious relationship issues. She seems to have not kept up in her training, not knowing much about cyber crimes, such as that email addresses could be spoofed. As the novel progressed and more of her story came out, I could understand her character but still found her a bit hard to like to the very end.

Jo's greatest positive trait is her tenacious attitude toward solving a mystery. While ruled a suicide initially, something doesn't set right with Jo and she digs and digs and digs. She alienates people right and left, except Squint, her faithful co-investigator. She finally gets to the bottom of the murder(s) and manages to make a friend, sort of, in the process.

The novel highlights the prejudice against women in law enforcement, at least in that area. Jo had been passed up for promotion, unjustly. But she might just have had the last word. We'll find out in the next novel in the series. This is a good novel for readers who like a balance of character development and police procedure with a good dose of suspense at the end.

Colorado Book Award-winning author M. E. Browning writes the Jo Wyatt Mysteries and the Agatha-nominated and award-winning Mer Cavallo Mysteries (as Micki Browning). Browning also writes short stories and nonfiction. Her work has appeared in magazines, anthologies, and textbooks. An FBI National Academy graduate, she worked in municipal law enforcement for more than two decades and retired as a captain before turning to a life of crime fiction.

Posted by Joan Nienhuis at 1:08 PM