The Barrister and the Letter of Marque by Todd M Johnson 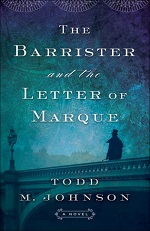 As a barrister in 1818 London, William Snopes has witnessed firsthand the danger of only the wealthy having their voices heard, and he's a strong advocate who defends the poorer classes against the powerful. That changes the day a struggling heiress, Lady Madeleine Jameson, arrives at his door.

In a last-ditch effort to save their failing estate, Lady Jameson invested in a merchant brig, the Padget. The ship was granted a rare privilege by the king's regent, a Letter of Marque authorizing the captain to seize the cargo of French traders operating illegally in the Indian Sea. Yet when the Padget returns to London, her crew is met by soldiers ready to take possession of their goods and arrest the captain for piracy. And the Letter – the sole proof his actions were legal – has mysteriously vanished.

Moved by the lady's distress, intrigued by the Letter, and goaded by an opposing solicitor, Snopes takes the case. But as he delves deeper into the mystery, he learns that the forces arrayed against Lady Jameson, and now himself, are even more perilous than he'd imagined.

I found this novel to be very informative about the state of the legal system in England in the early 1800s. I was appalled to see how the poor were disenfranchised by the courts. One did not have much of a chance if a capable barrister could not be hired. It seems innocence had to be proven when accused, rather than assumed innocent and guilt having to be proven. And trying to defend a case when opposed by a King's representative was particularly difficult.

It was also interesting to gather some information about the tension between England and France and the Crown trying to avoid additional conflict. I also learned about smuggling. The Crown had imposed high taxes to pay for the war with France. Smugglers provided goods for the poor when they were able to avoid the King's Navy. And I learned the difference between a solicitor and a barrister.

Johnson's writing style is good. The points of view changed often and that made the narrative a little more difficult to follow. I felt the characters were crafted well, even as each one was flawed. I was disappointed there was no author's note identifying historical facts behind the fiction. I trust Johnson portrayed an accurate sense of the legal system of the day. I was also disappointed there was not a stronger faith element to the characters. This is a good novel for readers who are interested in the legal system and court procedures of two centuries ago.

Todd M Johnson has practiced as an attorney for over 30 years, specializing as a trail lawyer. A graduate of Princeton University and the University of Minnesota Law School, he also taught for two years as adjunct professor of International Law and served as a US diplomat in Hong Kong. He lives outside Minneapolis, Minnesota with his wife and daughter. You can find out more at www.authortoddmjohnson.com. Photo by Emily Stephensen