To Write a Wrong by Jen Turano 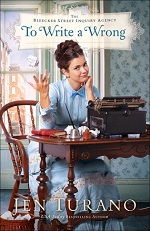 Miss Daphne Beekman is a mystery writer by day, inquiry agent by night. Known for her ability to puzzle out plots, she prefers working behind the scenes for the Bleeker Street Inquiry Agency, staying well away from danger. However, Daphne soon finds herself in the thick of an attempted murder case she's determined to solve.

Mr. Herman Henderson is also a mystery writer, but unlike the dashing heroes he pens, he lives a quiet life, determined to avoid the fate of his adventurous parents, who perished on an expedition when he was a child. But when he experiences numerous attempts on his life, he seeks out the services of the eccentric Bleeker Street Inquiry Agency to uncover the culprit. All too soon, Herman finds himself stepping out of the safe haven of his world and into an adventure he never imagined.

As the list of suspects grows and sinister plots are directed Daphne's way as well, Herman and Daphne must determine who they can trust and if they can risk the greatest adventure of all: love.

I don't know how Turano keeps coming up with funny novels but she does. I laughed out loud. Daphne is such a well crafted character. She is so sincere in wanting to figure out the crime but she bungles events so many times. I've heard of crashing a dinner party but Daphne takes it to a new level. And who knew a bustle was a good defense against an arrow or could function as a flotation device? I mean, who else could create horrible poetry upon demand like Daphne does?

Within the midst of the humor are some interesting and serious issues. There is over protection from a grandmother because of a previous disaster. The plight of women at the time is well covered. Daphne is a mystery novelist but must write under a male pseudonym because, of course, women would certainly not do anything like that. And most distressing to me, a husband could have his wife committed to an asylum without reason.

I recommend this novel to readers who are ready for a good dose of humor and a sprinkling of romance along with some very interesting commentary on the times.

This is the second novel in the Bleeker Street Inquiry Agency. You can read my review of the first in the series, To Steal a Heart.

Named one of the funniest voices is inspirational romance by Booklist, Jen Turano is a USA Today bestselling author, known for penning quirky historical romances set in the Gilded Age. Her books have earned starred reviews in Publishers Weekly and Booklist and top picks from Romantic Times. She's been a finalist twice for the RT Reviewers' Choice Awards. She and her family live outside of Denver, Colorado. You can find out more at https://jenturano.com/. Photo: Rey Laureano, Jr.

I received a complimentary egalley of this book from the publisher. My comments aare an independent and honest review.

Posted by Joan Nienhuis at 8:01 PM