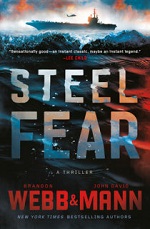 While it took me a while to get into this novel, it turned out to be an engaging one. The setting of an aircraft carrier was very interesting. I've never been on one and I appreciated the authors' good descriptions. I liked the plot, first people missing, presumed suicide by jumping but then a more clear idea of murder. I liked the idea of Finn, the deeply flawed hero, working to solve the case.

I have mixed feelings about Finn. I liked Finn and the way he thought. I liked his subtle investigation of the morale on the ship and then the murders. I was a bit puzzled, however, as I wondered how a man like Finn, so flawed, having blackouts, etc., ever made it into the SEALS.

I really liked the authors' writing style. While the plot progressed methodically, the revelation of Finn's background, his odd actions, and his observations kept me reading. There was enough suspense near the end to convince me I'll be watching for more from these authors.

Webb and Mann have been writing together for a decade. Their debut novel, Steel Fear is their seventh book together and the first thriller of many to come.

Brandon Webb joined the US Navy to become a Navy SEAL when he left home. Over his navy career he completed four deployments to the Middle East and one to Afghanistan, and redeployed to Iraq in 2006-2007 as a contractor in support of the US Intelligence Community. He has received numerous distinguished service awards. He ended his navy career to spend more time with family and focus on business. You can find out more at https://brandontylerwebb.com/.

John David Mann forged a career as a successful cellist and prize-winning composer, receiving his first award at age 15. He has been a thought leader in several different industries. During the 1990s, he built a multimillion-dollar sales/distribution organization of over a hundred thousand people. He is the co-author of more than 30 books and has won numerous awards. You can find out more at https://johndavidmann.com/.