The Elimination Threat by Michael Laurence 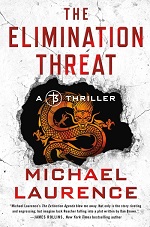 This action packed suspenseful novel is not for the weak of heart. Mason is on the trail of a nasty group accumulating power for centuries. They have done some gruesome murders to send a message to those opposing them. Mason and his crew are out to catch the nefarious people before they change the world for the worse, perhaps causing a war between the U.S. and Russia. This group has infiltrated many U.S. government law agencies so Mason is pretty much on his own.

I liked the novel, one in the genre of rather normal guy saving the world from a secret and powerful group. While there is a great deal of chasing after bad guys and suspenseful results, there is also quite a bit of informative material in the book. The potential threat has a nuclear aspect and we learn a great deal about nuclear bombs, material needed, and how they can be produced. There is also quite a bit of information about the Federal Reserve, printing money and the national debt. There is also a section on oil, petrodollars and the real reason the U.S. invaded Iraq. I did feel Laurence has some particular political viewpoints on the above topics that he had his characters proclaim. I wish there had been an author's note as to the elements of the novel based on fact.

This is a novel for readers who like lots of action, even if some of it is pretty gruesome, advanced technology, a complex plot, and lots of history and background information. There is a clear distinction between good and evil with the bad guys being quite evil in their pursuit of money and power. We are left with more potential danger so I'll be watching for the next in this series.

You can read my reviews of the previous books in the series: The Extinction Agenda and The Annihilation Protocol.

Michael Laurence was born to an engineer and a teacher and had his passion for science and history kindled by them. He studied biology and creative writing at the University of Colorado and holds multiple advanced certifications in medical imaging. He worked as an x-ray/CT/MRI technologist and clinical instructor before becoming a full time author. He lives in suburban Denver with his wife and children. Photo by Bryan Grant.

Posted by Joan Nienhuis at 5:16 PM