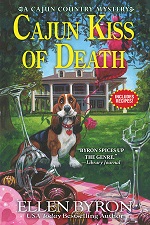 This novel is an immersion in all things Cajun. It got off to a bit of a rough start for me as the story began with lots of people, food and getting together. It took me a while to figure out who belonged to whom and how they were all related, whether by birth or business or interest. This is the seventh book in the series and I realized I missed much of the previous material on relationships. There is a big list of characters at the beginning of the book. That should have clued me in to the vast number of people and their interactions.

The murder did not happen until a quarter of the way into the book. After the murder, there seemed to be a better focus on the plot line and I became more interested. Prior to the murder, I did have a little trouble maintaining my interest in the book.

Several of the characters are involved in food preparation and service. There is much about the various kinds of Cajun foods and when they are eaten. Part of the plot is the stealing of recipes and I was surprised to find out that such a practice is done often and really cannot be prosecuted. And if you want to make some of the delicious sounding foods, recipes are included.

I like Maggie as an amateur sleuth. She is persistent in her tracking down the murderer as people she loves are suspects, including her mother. But I do think the best part of this book is the setting. It's a good book for readers who would like to be immersed in Cajun atmosphere, from hospitality to delicious food.

Ellen Byron is the Agatha Award winning author of the Cajun Country Mysteries, a USA Today bestselling series also winning multiple Best Humorous Mystery Lefty Awards from the Left Coast Crime conference. She also writes under the pen name of Maria DiRico. She is also a screen writer and has written over 200 national magazine articles. A native New Yorker, she attended Tulane University. She lives in Los Angeles with her husband and daughter. You can find out more at https://www.ellenbyron.com/.

I received a complimentary egalley of this book from the publisher. My comments are an honest and independent review.