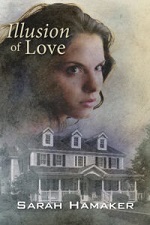 A suspicious online romance reconnects an agoraphobe and an old friend.

Nursing a hurt leg, psychiatrist Jared Quinby arrives in Culpeper, Virginia, on a case for the FBI. The investigation leads him to the doorstep of his childhood best friend, Mary Divers. Meeting Mary again is the one bright spot in his life.

Suffering from agoraphobia, Mary has at last found love with online beau David Kline and dares to dream of a future with him. Then David reveals he will be leaving the United States to become a missionary in Peru. Determined to stop living in fear, she accepts David’s marriage proposal, even though she’s never met him face-to-face.

As Jared’s case intersects with Mary’s online relationship, the more he uncovers, the more he fears for her safety. Jared tries to convince Mary not all is right with David, but she refuses to believe him. When tragedy strikes, Mary pushes Jared even farther away.

Will Jared convince Mary of the truth—and of his love for her—before it’s too late?

There were plot points I found very interesting. One was the idea of missionaries. Mary's parents abandoned her to become missionaries. (Or did they?) David tries to swindle Mary by claiming he is becoming a missionary and needs immediate finances. I am not sure what the message is, but using God's work to deceive others was disturbing.

I am too old fashioned to believe that romance could happen over the Internet, sight unseen. This interesting novel, with a naïve heroine and a gallant hero, is a good one for young people to read. It well portrays the dangers possible with online interaction verses the reality of actual in person relationships.

Sarah Hamaker has been spinning stories since she was a child, with nonfiction and romantic suspense books published. Her stories have also appeared in several Chicken Soup for the Soul volumes. She’s a member of ACFW and ACFW Virginia Chapter, as well as the president of Capital Christian Writers Fellowship. Her podcast, “The Romantic Side of Suspense,” can be found wherever you listen to podcasts. Sarah lives in Virginia with her husband, four children, and three cats.

Have you ever heard a story from a friend (or a friend of a friend) and thought it sounded more like fiction than reality? That’s what happened to me years ago when I heard first-hand a story about a woman who had been deceived by someone close to her.

Even while I grieved with my friend about the lies that had been told at her expense, I also admit to thinking, “That would make a fantastic storyline.” A couple of years later, I asked the friend for permission to use the basic outline of that story for what became Illusion of Love. To keep this friend’s identity a secret—and to avoid giving away the ending of my book—that’s all I can reveal to you.

However, what I can talk about is how interesting people’s reaction to the based-on-a-true story aspect has been along this book’s journey to publication. Most expressed their conviction that something similar could never happen to them. Part of that disbelief comes from our faith in our own ability to ferret out the truth from those around us.

Unfortunately, time and again, it’s been proven that we can be terrible when it comes to judging the true character of others! This is why people get away with pretending to be royalty or people lose money to someone’s Ponzi scheme or why those in authority can often get away with heinous crimes for years (#MeToo, Catholic priest sexual scandals are too horrific examples). Along the way, you’ll find people who wanted to think they wouldn’t be deceived…and were or who overlooked signs that in hindsight pointed right at the lie or perpetrator.

Why has this kept happening over and over again throughout history? I think it boils down to the simple fact that we want to believe we have excellent judgment when it comes to the character and intentions of others, whether we meet those people face to face or online. We also have a tendency, especially if we’re female, to ignore our gut when it tells us to be careful or wary of someone or a particular situation.

Especially when there’s real danger involved—in cases of potential abuse or criminal activity—it’s important to be prepared as much as we can be. One of the best books on this topic is Gavin de Becker’s The Gift of Fear. It’s a book I’ve recommended my teenage daughters and sons read before heading to college. What Gavin does is break down why our initial impressions can be wrong and why paying attention to our gut—that unconscious part of ourselves—can be crucial to staying safe, even if it means we sometimes offend or make people mad or upset. If only Mary, my heroine in Illusion of Love, had read The Gift of Fear, things might have turned out differently for her.

Why do you think we believe in our own judgment when it comes to people?

For Him and My Family, September 19

Because I said so -- and other adventures in Parenting, September 23

Spoken from the Heart, September 27

I received a complimentary digital copy of this book through Celebrate Lit. My comments are an independent and honest review. The rest of the copy of this post was provided by Celebrate Lit.
(My star ratings: 5-I love it, 4-I like it, 3-It's OK, 2-I don't like it, 1-I hate it.)
Posted by Joan Nienhuis at 5:49 AM

Thank you for sharing your review of this story. I am as old-fashioned as you I think as I don't believe that you can find true love on-line but the book cover and synopsis have intrigued me and I believe that I will enjoy reading this story.

This book sounds very intriguing and I am really looking forward to reading it!

Thanks for sharing! This looks good!

Oh, this sounds really interesting! Rather a scary thing to think about.

Did you notice the description has the wrong country? It should be Ecuador.

What inspires your book plot ideas?