If God is Love, Don't Be a Jerk by John Pavlovitz 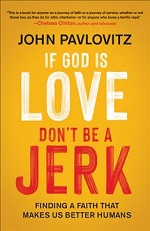 Pavlovitz was at one time a successful evangelical pastor. Then he pursued a spiritual journey that took him to a place where he now says he would no longer describe himself in such terms. His is a messy faith, he says. He questions the existence of hell. He questions the purpose of prayer. While there is much about which Pavlovitz and I do not agree, I realize this is a valuable book that should be read by Christians, whatever their tribal description. He's not one of “us” any longer but, my goodness, does he have some insightful comments.

Pavlovitz writes as an insider. He has studied and preached the Bible for decades. He realizes he, like all of us, is working with an incomplete knowledge and understanding of what Scripture says. But he does know Jesus gave us one assignment, one great command: to love God, our neighbor, and ourselves. And Pavlovitz doesn't like how contemporary Christians are handling that assignment. He recognizes a “loveless, Jesus-less Christianity” that exists today. (89/2553) He wonders what happened to compassion, the essential aspect of following Jesus. He identifies toxic faith and bad theology. He knows when a counterfeit Christ is being presented. He is concerned that we are no longer representing a God that non-Christians would want to seek.

Pavlovitz's faith is messy. His theology is fluid. Nonetheless, his spiritual journey has yielded one statement he can hold on to: “faith shouldn't make you a jerk.” (684/2553) Rather, we should be people rooted in love for humanity (all of it, not just the unborn). We must stop being a barrier to God. Pavlovitz has observed the behavior of Christians during these last years, during the time of crisis, and has seen the façade of loving Christianity ripped away. Rather than wearing a face mask as a deeply spiritual act embodying love for neighbor, for example, not wearing one became a loveless act and a political weapon.

This is a thought provoking book. It is especially of interest to people who have left organized Christianity, feeling the rug has been pulled out from beneath them. You are not alone in your messy faith, Pavlovitz assures. You will be helped to imagine what being a Christian is like when walking out the command to love. This book is not for Christians who think they have their faith settled, however, who are dependent upon that hour Sunday morning for their spirituality. You are not ready for the uncomfortable work of reexamining your image of God and the love He commands.

John Pavlovitz is a blogger, author, and pastor based in North Carolina. A 25 year veteran in the trenches of local church ministry, he is committed to equality, diversity, and justice – both inside and outside faith communities. When not actively working for a more compassionate planet, he enjoys spending time with his family, exercising, cooking, and having time in nature. He is the author of several previous books. You can find out more at https://johnpavlovitz.com/.

Posted by Joan Nienhuis at 6:16 AM