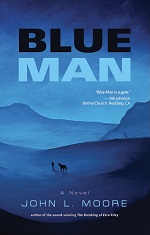 Ezra Riley is a hardened Montana cowboy who prefers the hills, cattle, and horses to cities, but his unique gift for dream interpretation has him secretly taken to the White House where the President is suffering from recurring nightmares. Riley's encounter with the President launches a series of attacks by the man behind the nightmares, William Anderson Hall, an elderly master spy and a pioneer in the CIA's experiments with psychic powers and hallucinogens. In his remote Virginia compound, Hall has invested 30 years and millions of dollars in creating Blue Man, the ultimate psychic warrior.

Riley's life is soon complicated by Davis Browne, a former agent with the Department of Homeland Security, and Hall's two nieces, Isabel Elizabeth Hall and Mary Margaret Hall. Riley's rough ride is balanced by his cowboy friend, the cartoonist Barney Wallace, whose loyalty follows Riley to the climactic end and the revelation of the content of the President's dream.

This is an interesting novel interweaving a political conspiracy with spiritual warfare. The spiritual warfare is enveloped in psychic research and abilities. We experience a highly developed man who is able to read minds, influence people with telepathy and accomplish astral projection. Or is he demon possessed? On the other side, battling the potential evil is a disgruntled Christian. He had at one time been active in Charismatic circles, a popular conference speaker with the ability to interpret dreams. Now he confines himself to his ranch, bruised by the behavior of church leaders.

Moore's writing style is engaging, even though I felt this novel took a while for me to grasp the setting and the plot. It wasn't until about half way through that I felt the story line became compelling. That was when the issues in the book became clear. One was spiritual warfare, disguised in the realms of politics and psychic ability. Other issues include how our memories can be used against us and how prayer really does have power. Another issue was a little revelation of Moore's political views as a character gives a political message near the end.

Moore provides some interesting allegories in the novel. One was Riley against the cow called the Wildebeast. That struggle between Riley and the cow seemed to paralleled the struggle between good and evil. And there was Riley's ability to tell the content of a dream when someone asked for an interpretation. Shades of the biblical Joseph there.

This is an entertaining novel. Moore has an engaging writing style combining imagination with spiritual realities to form a good plot with well developed characters. While this particular situation is resolved, we are left with characters showing potential for future adventures.

John L. Moore is an award-winning novelist and journalist. He has published seven novels, several nonfiction books and over 2,000 articles, poems, short stories, columns and reviews. A third-generation Montana rancher best known for his western classic, The Breaking of Ezra Riley and a pioneer in the Christian fiction genre, he is the winner of numerous awards, including a 2015 Will Rogers Medallion Award for Western Fiction for his sixth novel, Looking for Lynne. Active in ministry for over a quarter century, Moore has appeared in four documentaries due to his knowledge of the history of horses on the Northern Great Plains. He is a member of the Montana Cowboy Hall of Fame and the Montana Pro Rodeo Hall of Fame.