When you think of a “lucky” person, do you think of someone who has won the lottery? Someone who has had a few big breaks you never got? Successful people usually don't mention luck. Talent and hard work generally predict success. But even the successful have experienced a break here and there.

Real “luck,” according to Packiam, involves the arrival of the kingdom of God. Jesus announced it using makarios, “fortunate, happy.” Today we would say, “lucky,” such as, “You lucky guy, you get to go on vacation.”
Jesus described the lucky in His Sermon on the Mount and Packiam concentrates on the four beatitudes found in Luke's gospel. He uses stories from the Bible, his own experiences and those of others to explain our luck. He sums up Jesus' message, “Lucky you, for the kingdom of God has come to the unlikely and the unlucky.” (35)
We believers are in that period of waiting for what we know is ours, like a child waiting for the bicycle he knows his parents have bought him for Christmas. The kingdom is “not yet” as well as “now.”
Religion says the rich are blessed. Jesus said the poor are blessed. They are lucky – the powerless, the God-dependent. The spiritually hungry are lucky as God is preparing a feast for the future as well as feeding us now.
Mourners God promises to bless include those with deep remorse and repentance for sins. They also include those suffering unrelated to God's discipline. In the midst of mourning God brings hope. Those who are rejected on this earth because of their love for Jesus will have a blessed future in eternity.
Discussion questions at the end of each chapter make this a great book for small groups. 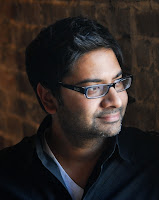 We have not become lucky for our own enjoyment, however. “In Christ, we have become lucky so we can become God's image-bearers and His luck-bearers to the world. The kingdom of God has come to us so that it might come through us to others.” (63)

I was provided a copy of this book by The B&B Media Group, Inc. on behalf of the publishers, David C. Cook, for the purpose of this review.

Publisher information.
Posted by Joan Nienhuis at 6:00 AM