A Face to Die For by Andrea Kane 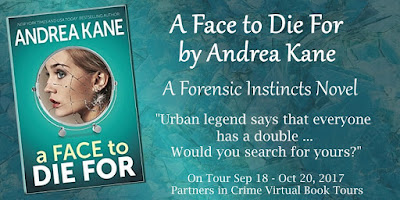 A Face to Die For

Urban legend says that everyone has a double, or exact look-alike. Would you search for yours? And if you found them, would you risk your life for theirs?

When a chance encounter outside the Plaza Hotel in Manhattan results in mistaken identity, wedding planner Gia Russo is curious to find the person whose cell phone picture has been shown her—veterinarian Dr. Danielle Murano, her exact look-alike. A Facebook private message blossoms into a budding, long-distance friendship, and the two women agree to meet in New York and see the truth for their own eyes.
Shocked at the sight of one another, they quickly bond over drinks, childhood pictures and an uncanny feeling that they share more than just a visual resemblance. Together they decide to end the speculation and undergo DNA testing for siblingship. But when the tests confirm they’re identical twins, more questions are raised than answered.
And with good reason. The same mysterious forces that separated the sisters years ago are still at large, frantic to keep the two women apart. Their attempts to do so become more violent once it becomes clear that the two sisters have found each other. But when the danger escalates and the sisters fear for their lives, Gia turns to a former client of her wedding planning company, Marc Devereraux of Forensic Instincts, for help.
Despite being embroiled in another case, Forensic Instincts agrees to help Gia and Danielle discover who has been threatening them. And when Forensic Instincts discovers that this case is linked to the Organized Crime, they must dig up skeletons better left buried, and get at the frightening truth without destroying the sisters and the families they have grown to love.

I thoroughly enjoyed this novel. It has a good plot but what I liked best about it was the characters. They made the novel a delight to read. The Forensic Instincts group is made up of people with unusual abilities. One reads body language well. Another is great at acting. One fellow is a technological expert while yet another senses the psychological states of others as well as their emotional history. It was fun to read how the group worked together to solve the mystery. I really enjoyed the wit and humor in their verbal interaction too.

I recommend this novel to readers who enjoy great character interaction as well as the solving of the mystery. You'll also get to ponder the idea of siblings being separated shortly after birth, being adopted, and then being reunited. I'll be looking for the next novel in the series. Kane can't write them fast enough for me.

Andrea Kane is the New York Times and USA Today bestselling author of twenty-eight novels, including fourteen psychological thrillers and fourteen historical romantic suspense titles. With her signature style, Kane creates unforgettable characters and confronts them with life-threatening danger. As a master of suspense, she weaves them into exciting, carefully-researched stories, pushing them to the edge—and keeping her readers up all night.

Kane’s first contemporary suspense thriller, Run for Your Life, became an instant New York Times bestseller. She followed with a string of bestselling psychological thrillers including No Way Out, Twisted, and Drawn in Blood.
Her latest storytelling triumph, A Face To Die For, extends the Forensic Instincts legacy where a dynamic, eclectic team of maverick investigators continue to solve seemingly impossible cases while walking a fine line between assisting and enraging law enforcement. The first showcase of their talents came with the New York Times bestseller, The Girl Who Disappeared Twice, followed by The Line Between Here and Gone, The Stranger You Know, The Silence that Speaks and The Murder That Never Was.
Kane’s beloved historical romantic suspense novels include My Heart’s Desire, Samantha, The Last Duke, and Wishes in the Wind.
With a worldwide following of passionate readers, her books have been published in more than twenty languages.
Kane lives in New Jersey with her husband and family. She’s an avid crossword puzzle solver and a diehard Yankees fan. Otherwise, she’s either writing or playing with her Pomeranian, Mischief, who does his best to keep her from writing.

Visit the other great hosts on this tour for more great reviews, interviews, guest posts, and giveaways!
Click here to view the A Face to Die For Participants