Murder in the Dog Days by P M Carlson 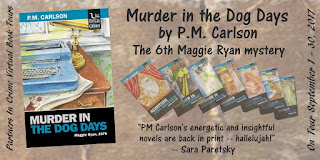 Murder in the Dog Days

On a sweltering Virginia day in 1975, reporter Olivia Kerr, her husband Jerry Ryan, his very pregnant sister Maggie and her family decide to have a beach picnic. Olivia invites her colleague Dale Colby and his family to join them. At the last minute, Dale decides to stay home to pursue an important story. But when the beach-goers return, they find Dale lifeless in a pool of blood inside his locked office.
Police detective Holly Schreiner leads the investigation, battling Maggie—and demons of her own.


"An ingeniously plotted, fair-play, locked-room mystery, one of the best we've encountered." — Tom and Enid Schantz, The Denver Post
"A dandy locked room murder…The investigation is a dangerous one… [the] solution both surprising and satisfying" — A Suitable Job for a Woman
"A satisfying, fast-paced whodunit that also explores a range of social issues, especially the violence of war and its aftermath." — Cynthia R. Benjamins, Fairfax Journal
​“[Maggie Ryan] has been a role model for women since the beginning and I loved watching her merge marriage and children with her talent for solving mysteries!” — Margaret Maron

I thoroughly enjoyed this mystery. It contains a great mix of character development, action, and scene description. The author has a compelling writing style that I really appreciated. I usually don't like a universal point of view but it worked for me in this novel. Though this novel is far into the series, it is the only one I've read. It was a great read on its own and I will be looking for more from Carlson.

The plot deals with solving a mystery. I love the idea of a murder behind locked doors. I also liked the idea of getting to know the characters. I really like Maggie. She has an intuitive mind and is filled with compassion. I liked the police detective, trying to deal with the tragedies from her past. She had been a nurse in Viet Nam and there is quite a bit about that war and reactions to it in the novel. I remember well those troubled years and Carlson has done an excellent job of describing feelings of veterans and protesters.

I recommend this mystery to those who enjoy a good mix of character revelation and growth woven into a good mystery.

Love this Video Chat Featuring Murder in the Dog Days:

“I don’t understand!” Donna Colby cried out. Her self-control cracked. She reached toward Holly in appeal, tears starting. “It was bolted! How could anyone—even if Dale let them in, they couldn’t bolt it again after they—”
“Yes, Mrs. Colby.” Holly broke in, firm and reassuring, to deflect the outburst. “We’ll check into it. You can depend on it.”
‘Thank you,” said Donna with a little choking sound.
“Now, what did you do when you realized the door was bolted?”
“Well, he usually takes a nap. I thought maybe he was asleep.” Donna Colby was trying to revert to her numbed monotone again, but a tremor underlay her words. “Then Maggie went to look in the window and came running back in and said hurry up, we had to get the door open. So she did, and—” She stopped. The next part was the unspeakable, Holly knew. Donna Colby turned her face back to the pink flower on the back of the sofa, tracing the outline with a forefinger. “All that blood,” she murmured. “I just don’t… Why?”
“I know, Mrs. Colby.” Holly tried to keep her voice soothing in the face of the incomprehensible. A husband and father lay twisted in the den. Why? Tell me why. And the others, so many others. A flash of reds at the back of her eyes. A blue-green stench. A tiny whispered beat, ten, eleven. Twelve. No more. Hey, cut the bullshit, Schreiner. Just get the details. Ain’t no time to wonder why, whoopee we’re all gonna die. Holly flipped to a new page, keeping her voice colorless. “What did you do when you got the door open?”
“We all ran in—I don’t remember, it was so—I couldn’t—the blood. Maggie went to him. Sent Olivia to call an ambulance. Told me to keep the kids out, take them to the kitchen.”
Holly noted it down. This Maggie sounded like a real take-charge type. “Okay. And then what?”
“I don’t remember much. She made me leave, take care of the kids.”
“What was she doing?”
“I don’t know. There was so much…” The word escaped Donna and she stared at Holly in mute terror before finding it again, with an almost pitiful triumph. “Confusion. The men came back. Maggie will tell you,” she added hopefully, trying to be helpful. All her life, probably, being nice had kept her out of trouble. But now she’d hit the big trouble, and Holly knew that no weapons, even niceness, could help now.
* * *
Excerpt from Murder in the Dog Days by P.M. Carlson. Copyright © 2017 by P.M. Carlson. Reproduced with permission from P.M. Carlson. All rights reserved.

P.M. Carlson taught psychology and statistics at Cornell University before deciding that mystery writing was more fun. She has published twelve mystery novels and over a dozen short stories. Her novels have been nominated for an Edgar Award, a Macavity Award, and twice for Anthony Awards. Two short stories were finalists for Agatha Awards. She edited the Mystery Writers Annual for Mystery Writers of America for several years, and served as president of Sisters in Crime.

Click here to view the Murder in the Dog Days by P.M. Carlson Participants