The Awakening of HK Derrberry by Jim Bradford with Andy Hardin

In the fall of 1999, middle aged Bradford noticed a special needs boy sitting at the restaurant table by himself. HK, nine years old, would sit there for hours while his grandmother worked at the restaurant cash register. Bradford stopped to talk to the boy and became the victim of the biggest thief in town. “...HK Derryberry had committed the perfect crime: he stole my heart.” (12)

What follows is a touching story of Bradford getting to know HK and helping him navigate life. He found out HK's background, his being born blind and with cerebral palsy, and how he came to be taken care of by his grandmother. Bradford and Hardin do a good job of writing the story in a way that captivated me. I felt like I was right there in the story.

For me, the best parts of the book were when HK gave inspirational talks to others. He would explain that he had a number of disabilities. “But those things do not stop me from dreaming, and when I dream, I always dream big,” he told a sports team. (165) He admonished them to dream big too. And in an inspirational speech at a private academy, “I've never had a negative attitude. I've always been blind and had cerebral palsy, and there is nothing I can do about it.” (177) He quoted the apostle Paul saying he could do all things in Christ. HK concluded that he knew he had quite a few physical capabilities. “...I chose to concentrate on those rather than my limitations.” (177) My word! What an inspiration for us all! 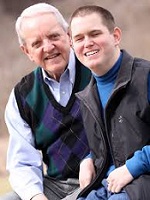 I highly recommend this book as a very good account of an unusual friendship and of overcoming life's challenges. HK concentrated on his abilities, never giving up on himself. Yes, HK had a friend who helped him meet sports stars and go on adventures. But that is an important message for the rest of us. We are to never give up on those with disabilities. This book is clear, together we can conquer adversity.

You can find out more about HK and what he is up to at http://www.hkderryberry.com/about/.

Food for thought: “If I can do all these things with my disabilities, then surely you can do them since most of you are not disabled.” (179)

I received a complimentary copy of this book through Handlebar. My comments are an independent and honest review.
Posted by Joan Nienhuis at 4:57 PM