Convicted by Jameel McGee and Andrew Collins with Mark Tabb 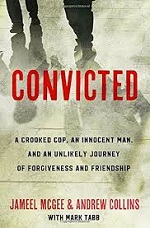 This is one of those stories that when you finish, you know that God's hand was in it all the way. How else could a black man, wrongly imprisoned for a crime he did not commit, and a white man, the crooked cop who lied to get the conviction, become friends?

McGee was in the wrong place at the wrong time and was arrested by Collins. Collins was a cop who prided himself in arrests and convictions, even if he had to lie or create evidence to get them. He was convinced McGee was guilty of drug possession with intent to sell and made sure the evidence made it look that way. But God had His way and Collins was himself caught and sentenced for being a crooked cop. McGee's conviction was overturned. He became a free man, after he had spent years in prison for a crime he did not commit. Only God could have orchestrated that the two men, both having been released from prison, would meet. 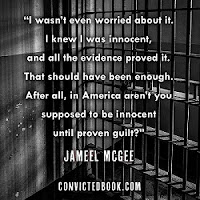 I really liked McGee's honesty in his account. He had made some errors in judgment for sure. But he had not broken the law. I appreciated his account of establishing in his faith in prison. I felt for him after his release from prison. Even though innocent, his false arrest and prison time made it very difficult for him to get a job.

I was appalled at Collins' account of some techniques he and other police officers use to get convictions. They believed the legal advantage went to the drug dealers so did things like bending the rules or lying under oath or planting evidence, to ensure an indictment of those they felt were guilty. 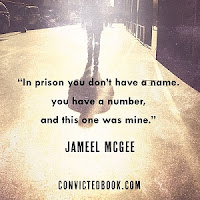 That these two men would be reconciled is a miracle. It is only through God working in both their hearts that forgiveness and restoration could occur. Their story is a great example of what God can do in the hearts of men yielded to Him.

I recommend this book to readers who enjoy an honest and simply written story of God overcoming racial tension and anger to bring two men together in friendship. It is an amazing example of God in action.

Get a sneak peek of the book here.

You can watch a video here.

I received a complimentary ARC of this book from the publisher. My comments are an independent and honest review.
Posted by Joan Nienhuis at 4:05 PM