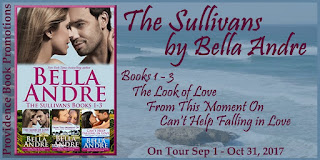 
More than 6 million readers have already fallen in love with the Sullivans! Now get ready to meet your new favorite family in Bella Andre's New York Times and USA Today bestselling contemporary romances with the first three books in the #1 hit series.


"Not since Nora Roberts has anyone been able to write a big family romance series with every book as good as the last! Bella Andre never disappoints!" ~ Revolving Bookcase Reviews

Chloe Peterson is having a bad night. A really bad night. The large bruise on her cheek can attest to that. And when her car skids off the side of a wet country road straight into a ditch, she's convinced even the gorgeous guy who rescues her in the middle of the rain storm must be too good to be true. Or is he? As a successful photographer who frequently travels around the world, Chase Sullivan has his pick of beautiful women, and whenever he's home in San Francisco, one of his seven siblings is usually up for causing a little fun trouble. Chase thinks his life is great just as it is–until the night he finds Chloe and her totaled car on the side of the road in Napa Valley. Not only has he never met anyone so lovely, both inside and out, but he quickly realizes she has much bigger problems than her damaged car. Soon, he is willing to move mountains to love–and protect–her, but will she let him?


FROM THIS MOMENT ON

For thirty-six years, Marcus Sullivan has been the responsible older brother, stepping in to take care of his seven siblings after their father died when they were children. But when the perfectly ordered future he's planned for himself turns out to be nothing but a lie, Marcus needs one reckless night to shake free from it all. Nicola Harding is known throughout the world by only one name – Nico – for her catchy, sensual pop songs. Only, what no one knows about the twenty-five year old singer is that her sex-kitten image is totally false. After a terrible betrayal by a man who loved fame far more than he ever loved her, she vows not to let anyone else get close enough to find out who she really is…or hurt her again. Especially not the gorgeous stranger she meets at a nightclub, even though the hunger – and the sinful promises – in his dark eyes make her want to spill all her secrets.

Gabe Sullivan risks his life every day as a firefighter in San Francisco. But after learning a brutal lesson about professional boundaries, he knows better than to risk his heart to his fire victims ever again. Especially the brave mother and daughter he saved from a deadly apartment fire…and can't stop thinking about. Megan Harris knows she owes the heroic firefighter everything for running into a burning building to save her and her seven-year-old daughter. Everything except her heart. Because after losing her navy pilot husband five years ago, she has vowed to never suffer through loving – and losing – a man with a dangerous job again.


Get Your Copy of The Sullivans Boxed Set on: Amazon, Barnes & Noble, & Add it to your Goodreads List!

I read only part of the first book in this collection because it was extremely sensual in nature and included graphic descriptions of sex. I was unaware of the graphic nature of the sex scenes when I signed up for this tour. That being said, I did find that what I read was well written. While I do not appreciate descriptive lustful sex as part of a plot, others may. Potential readers need to be aware of the graphic nature of the sex scenes included in the first book.

Chase almost missed the flickering light off on the right side of the two-lane country road. In the past thirty minutes, he hadn’t passed a single car, because on a night like this, most sane Californians—who didn’t know the first thing about driving safely in inclement weather—stayed home.
Knowing better than to slam on the brakes—he wouldn’t be able to help whomever was stranded on the side of the road if he ended up stuck in the muddy ditch right next to them—Chase slowed down enough to see that there was definitely a vehicle stuck in the ditch.
He turned his brights on to see better in the pouring rain and realized there was a person walking along the edge of the road about a hundred yards up ahead. Obviously hearing his car approach, she turned to face him and he could see her long wet hair whipping around her shoulders in his headlights.
Wondering why she wasn’t just sitting in her car, dry and warm, calling Triple A and waiting for them to come save her, he pulled over to the edge of his lane and got out to try and help her. She was shivering as she watched him approach.
"Are you hurt?"
She covered her cheek with one hand, but shook her head. "No."
He had to move closer to hear her over the sound of the water hitting the pavement in what were rapidly becoming hailstones. Even though he’d turned his headlights off, as his eyes quickly adjusted to the darkness, he was able to get a better look at her face.
Something inside of Chase’s chest clenched tight.
Despite the long, dark hair plastered to her head and chest, regardless of the fact that looking like a drowned rat wasn’t too far off the descriptive mark, her beauty stunned him.
In an instant, his photographer’s eye cataloged her features. Her mouth was a little too big, her eyes a little too wide-set on her face. She wasn’t even close to model thin, but given the way her T-shirt and jeans stuck to her skin, he could see that she wore her lush curves well. In the dark he couldn’t judge the exact color of her hair, but it looked like silk, perfectly smooth and straight where it lay over her breasts.
It wasn’t until Chase heard her say, "My car is definitely hurt, though," that he realized he had completely lost the thread of what he’d come out here to do.
Knowing he’d been drinking her in like he was dying of thirst, he worked to recover his balance. He could already see he’d been right about her car. It didn’t take a mechanic like his brother, Zach, who owned an auto shop—more like forty, but Chase had stopped counting years ago—to see that her shitty hatchback was borderline totaled. Even if the front bumper wasn’t half smashed to pieces by the white farm fence she’d slid into, her bald tires weren’t going to get any traction on the mud. Not tonight, anyway.
If her car had been in a less precarious situation, he probably would have sent her to hang out in her car while he took care of getting it unstuck. But one of her back tires was hanging precariously over the edge of the ditch.
He jerked his thumb over his shoulder. "Get in my car. We can wait there for a tow truck." He was vaguely aware of his words coming out like an order, but the hail was starting to sting, damn it. Both of them needed to get out of the rain before they froze.
But the woman didn’t move. Instead, she gave him a look that said he was a complete and utter nut-job.
"I’m not getting into your car."
Realizing just how frightening it must be for a lone woman to end up stuck and alone in the middle of a dark road, Chase took a step back from her. He had to speak loudly enough for her to hear him over the hail.
"I’m not going to attack you. I swear I won’t do anything to hurt you."
She all but flinched at the word attack and Chase’s radar started buzzing. He’d never been a magnet for troubled women, wasn’t the kind of guy who thrived on fixing wounded birds. But living with two sisters for so many years meant he could always tell when something was up.
And something was definitely up with this woman, beyond the fact that her car was half-stuck in a muddy ditch.
Wanting to make her feel safe, he held his hands up. "I swear on my father’s grave, I’m not going to hurt you. It’s okay to get into my car." When she didn’t immediately say no again, he pressed his advantage with, "I just want to help you." And he did. More than it made sense to want to help a stranger. "Please," he said. "Let me help you."
She stared at him for a long moment, hail hammering between them, around them, onto them. Chase found himself holding his breath, waiting for her decision. It shouldn’t matter to him what she decided.
But, for some strange reason, it did.
**
Excerpt from THE LOOK OF LOVE by Bella Andre. Copyright © 2017 by Bella Andre. Reproduced with permission from Bella Andre. All rights reserved.

Bella Andre is the New York Times, USA Today and Publishers Weekly bestselling author of "The Sullivans", "The Maverick Billionaires", "The Morrisons", and the NYT bestselling "Four Weddings and a Fiasco" sweet romance series written as Lucy Kevin.
Sign up for Bella's newsletter at www.BellaAndre.com/Newsletter
Visit Bella's website at www.BellaAndre.com
Follow Bella on twitter at www.twitter.com/bellaandre
Join Bella on Facebook at www.facebook.com/bellaandrefans
Having sold more than 6 million books, Bella Andre's novels have been #1 bestsellers around the world and have appeared on the New York Times and USA Today bestseller lists 32 times. She has been the #1 Ranked Author at Amazon (on a top 10 list that included Nora Roberts, JK Rowling, James Patterson and Steven King), and Publishers Weekly named Oak Press (the publishing company she created to publish her own books) the Fastest-Growing Independent Publisher in the US. After signing a groundbreaking 7-figure print-only deal with Harlequin MIRA, Bella's "The Sullivans" series is being released in paperback in the US, Canada, and Australia.
Known for "sensual, empowered stories enveloped in heady romance" (Publishers Weekly), her books have been Cosmopolitan Magazine "Red Hot Reads" twice and have been translated into ten languages. Winner of the Award of Excellence, The Washington Post called her "One of the top writers in America" and she has been featured by Entertainment Weekly, NPR, USA Today, Forbes, The Wall Street Journal, and TIME Magazine. A graduate of Stanford University, she has given keynote speeches at publishing conferences from Copenhagen to Berlin to San Francisco, including a standing-room-only keynote at Book Expo America in New York City.
If not behind her computer, you can find her reading her favorite authors, hiking, swimming or laughing. Married with two children, Bella splits her time between the Northern California wine country and a 100-year-old log cabin in the Adirondacks.

Here are the great hosts that will be touring with us! Sign up & have your info included here too!
Click here to view the The Sullivans Boxed Set Books 1-3 by Bella Andre Book Tour Participants

This is a rafflecopter giveaway hosted by Providence Book Promotions for Bella Andre. There will be two (2) winners of one (1) Gift of Special Bella Andre Swag! This giveaway is open to US residents only. The giveaway begins on September 1 and runs through November 2, 2017.