Unmaking the Presidency by Susan Hennessey and Benjamin Wittes 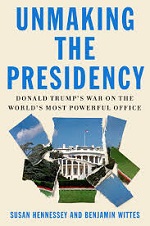 I had no idea there so was little law governing the behavior of the U.S. President. Like many Americans, I suppose, I assumed what has become the behavioral norm of civic minded presidents was somehow governed by rules. Not so. A president possess powers well beyond anything I imagined. We Americans have trusted a president would act in a manner within those powers to benefit the country, not himself or his friends. Civic virtue was assumed.

Most important, the authors claim, is the oath of office. It attempts to harness the office holder so that “presidents make earnest efforts to use their office on behalf of the country.” (22) The oath imposes duty and obligation. (23) But it only works when the president honestly means what he says when he recites it. The presidency doesn't work as we expect in the absence of good faith. The authors note Trump is not a hypocrite in this regard. “He doesn't pretend to civic virtue.” (31)

With respect to a president's speech, I was shocked to find that the Supreme Court has ruled that a president is entitled to immunity from liability. (98-99) The president can say something for which a private citizen would be held liable, yet with immunity.

It has become the norm that the Justice Department be apolitical but that is not mandated. (187) Federal prosecutors work for the president, for example. He can fire them and order them not to proceed with a particular investigation. The president can legally fire a special prosecutor or limit his power. (213)

“Modern presidents have the power to do a great deal more than the founders...ever imagined.” (236) The office is especially vulnerable to personality, the authors note. Presidential speech about foreign countries, for example, be it a well crafted talk or a midnight tweet, is operational as foreign policy. (238) Domestic declarations must be approved for funding and there Congress has some control.

I was shocked at the broad powers the president has. In years past, civic responsibility ruled behavior. We have had centuries of developing the public expectation of the president's role. (189) Current behavior is at odds with that traditional understanding but is not necessarily opposed to constitutional laws.

I highly recommend this book. I learned a great deal about the role of the president, as defined by the Constitution, as we have come to expect it be fulfilled, and as evidenced in current behavior.