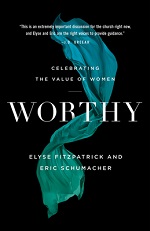 I have strong mixed feelings about this book. First the good news.

The authors do a good job of showing how God used women in Israel's history. They do a great job of showing the redemptive nature of Jesus in how He treated women. A good example is comparing the Old Testament law regarding women being unclean and untouchable to the way Jesus treated the bleeding and therefore unclean woman, healing her.

The authors are good at calling men to task for their attitudes toward women. Schumacher encourages men to be open to training and equipping women. “We ought not to be resistant when a woman corrects our theology or practice.” (148) Women are called to proclaim the gospel, he notes. (148) Preach it, brother.

The authors also do a pretty good job of relating how women have felt through the years, that the church identified women as of less value than men and limited their use in the Kingdom. They encourage women to remember how Jesus dignified women. They do a good job of encouraging churches to invite “worthy women into the non-authoritative speaking ministry of the congregation.” (204) They do a good job encouraging churches to support women who have painful concerns, such as those of their husband's abuse or sexual sin. They do a good job of calling the body to unity, regardless of their position on women in ministry.

What is contained in the book is very good. However, what's missing is, well, lots.

The authors totally ignore some of the most pesky and women devaluing passages in the Bible. The passages absent from commentary in this book are some of the ones that most troubled me as a young female Christian.

Here is what is not covered in this book. Only males had the sign of the covenant God made with Abraham and his descendants. Only males participated in Israel's feasts. (Ex. 23:17) Only males were included in Israel's census. (Num. 1:2) In the Ten Commandments, a wife is described as a man's possession. (Ex. 20:17) An unmarried woman could be forced to marry her rapist. (Deut. 22:28-29) A woman was unclean twice as long when birthing a daughter as opposed to birthing a son. (Lev. 12:2-5) A woman's vows could be nullified by her father or her husband. (Numb. 30) Only a man could initiate divorce. (Deut. 24:1)

Perhaps the most disturbing passage is Lev. 27:1-7 where women of various ages are “valued” consistently a little over half the value of men of the same age. The authors include a reference to this passage in one of their discussion questions. They ask, “Does this strike you as denigrating to a woman's worth? Why or why not?” (106) Readers get no help in coming to grips with this or the other devaluing passages.

There was also an area where I thought the authors were being nice but perhaps not sincere. The authors, knowing women in the military and working for the FBI, write, “Women, you are free to discern what kind of vocation the Lord is calling you to and he will use you as you work in wisdom for his glory.” (135) That might sound nice but is not true from what the authors wrote previously. “Elyse and I both believe that the Bible limits the office of pastor/elder to men who are called and qualified by the Scripture.” (87) Women called to pastoral ministry, and I believe some are, are not so free to discern the vocation to which the Lord has called them. The authors assure women “a wealth of other avenues are available for sisters to exercise their gifts...” (87) Right. The authors also quote a commentary on Matthew, the author declaring God “as an equal opportunity dispenser of both his grace and of contexts to serve him.” (167) Not really, if the pastor/elder context is forbidden for women. (87) The authors reaffirm their male only pastor/elder role near the end of the book. (210) That is tragic, considering the number of stories they relate about male elders not holding men accountable for sexual sin, often blaming the wife instead. Women elders bring a sensitivity to such issues men do not have.

So that's the good news and the bad news about this book. The authors note that they hope to transform the ways men and women think about and relate to women. (23) They also hope this book convinces women God cherishes and values them. (23) They've done a good job of giving examples where God used women and valued women. They just ignored too many examples of where it seems God devalues women for me to be satisfied with the book.

Food for thought: “I wonder where the church would be if women were allowed to work according to their gifting and if their skill, intelligence, wisdom, and piety were taken as seriously as men's.” (227)

Elyse Fitzpatrick (www.elysefitzpatrick.com) is a popular speaker and author, speaking at such events as The Gospel Coalition and Nancy Leigh DeMoss's Revive Conference. She and her husband attend Grace Bible Church, a reformed congregation in Escondido, California. She hold a certificate in biblical counseling from CCEF (San Diego) and an MA in Biblical Counseling from Trinity Theological Seminary. She has authored 22 books. She has been married over 40 years and has three adult children and grandchildren.

Eric Schumacher (www.emschumacher.com) is a pastor, songwriter, and author whose work has been featured by the Gospel Coalition and elsewhere. He has a BA in communications and an MDiv from Southern Baptist Theological Seminary. He and his wife have five children and live in Iowa.

I received a complimentary copy of this book from the publisher. My comments are an independent and honest review.
Posted by Joan Nienhuis at 5:25 PM