Get in the Game by Kevin Atlas 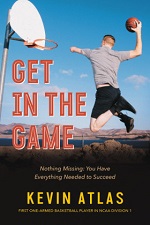 Kevin was born missing the lower part of his left arm. The umbilical cord had wrapped around his neck but, still in the womb, he had an arm between the cord and his neck. That probably saved his live yet left him with only a nub below his elbow. He shares the embarrassment he experienced as a child, courtesy of other kids. But there was something stirring inside him. Rather than being an obstacle, he learned to use his nub for advantage. He was inspired by the one handed major league pitcher Jim Abbott. He was encouraged by coaches and others who came alongside. He figured he had to work twice as hard as those with two complete arms when he turned out for basketball. As a result, he became the first player with a partial limb to win an NCAA Division 1 scholarship in basketball.

This is an inspiring book. Kevin challenges readers to take the thing that makes us feel inadequate, the thing we think we will never overcome, and work through it to use it for advantage. Everyone has been created by God for a purpose, he reminds us. There are no excuses. He has inspired others with his motivational talks and the documentary made about him. Now he inspires others to live a fulfilling life of purpose through this book.

I recommend this book to those who need that encouragement to know that what might appear to be an obstacle can be turned into a means of living our your purpose. The writing style is clear so this book would be suitable for even young readers. There are questions at the end of each chapter for personal reflection.

You can read an excerpt from the book here.

You can watch the trailer for the documentary here.

Kevin Atlas (formerly Laue) is nearly seven feet tall. Even though he was born missing much of his left arm, he became one of the top basketball players in his home state of California and earned a scholarship to play at Manhattan College in New York City. He is a popular motivational speaker and lives in Sparks, Nevada. You can find out more at http://kevinatlas.com/ Photo credit: Josh Birchfield

I received a complimentary egalley of this book from the publisher. My comments are an independent and honest review.
Posted by Joan Nienhuis at 4:03 PM