The Wormwood Prophecy by Thomas Horn 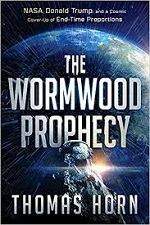 Christians have been intrigued by end times prophecies since the time they were written, I think. Horn brings his most recent ideas to the mix in this book.

He wonders if an approaching asteroid might precipitate much of what we read about in Revelation. An enormous asteroid, Apophis, will pass near earth April 13, 2029. If it is the biblical Wormwood, its approach would be around the middle of the Tribulation. The approximate beginning of the Tribulation would be October 13, 2025.

While Horn assures us he is not “setting dates here,” he does believe Apophis is the most likely candidate to fulfill the Wormwood prophecy. (27, 33) He does note there is an earlier possibility, 2018 LFI6, with a date of an August 8, 2023 pass.

Horn argues his point for an asteroid fulfillment by showing how God frequently used natural means in the past. He has quite a section on the Egyptian plagues, for example. He shows how the asteroid (or comet) impact could set off cataclysmic events such as volcanoes and poisoned water. (196, 199-200)

Horn's suggestions are about as good as the myriad of others I have read over the years. As with books like this one, we will know whether Horn's assumptions are correct in a few years.

There is one aspect of this book I found quite puzzling. Regarding biblical interpretation, Horn says the first rule is this: “There can be only one true meaning of the verse in question, and that is the meaning that the author of that book intended for his original readers.” (131) That seems to exclude most prophecy as I am sure many of the prophetic writers had no idea what the actual fulfillment of the prophecy might be. Do we really think Isaiah knew what he was writing about when he said a virgin would conceive? (Isa. 7:14)

This book is a good addition to the many ones already suggesting ways prophecy might be fulfilled. That Apophis might strike Earth has been all but ruled out by continuing astronomical observations.

Thomas Horn is a television and radio personality as well as best-selling author and publisher. He serves as the CEO of SkyWatchTV, known for its breaking news and in depth investigative reports about prophecy, conspiracies, and the supernatural. He is the founder of Defender Films and Defender Publishing and has appeared on a variety of media.

In this world of constant competition, it is difficult to survive as a self-pub author. Every detail matters and getting reviews is a big part of my marketing strategy. I ordered a few reviews from https://100freekindlereviews.com to get more visibility and sales this Christmas season..