The Last Odyssey by James Rollins 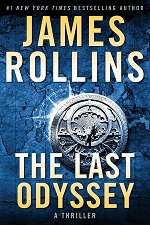 I have read a number of Sigma Force novels. Rollins is a master at combining history and science and imagination and a bit of fantasy. The result is an exciting and thoroughly engaging adventure.

This novel centers on a plot to bring about the end of the world, so to speak. Actually, the desire is to generate a global war – Armageddon. A fanatic Christian thinks it will bring the Lord's return. Fanatic Muslims think it will identify their last leader. A rabbi thinks the Messiah will finally appear. They combine forces and the only hope for the world is Sigma Force.

What a great adventure. There are interesting locations, like an under glacier cave in Greenland and a bronzed cave in Morocco. There are ancient maps and documents Sigma Force must interpret. There are ancient mechanical beasts and modern warfare tactics. It all adds up to action galore, sometimes generating over the top suspense.

And what I like best about Rollins' books is that he always includes an “Author's Note to Readers: Truth or Fiction” at the end of the book. He gives the sources for his ideas, including historical and scientific aspects. He distinguishes myth and fact and identifies details in the book based on actual geography and past events. He clearly identifies the parts of the book generated purely by his own imagination.

This is a good novel for readers who like plenty of action interspersed with bits of the personal lives of those in Sigma Force. I especially liked the thought provoking aspect of the novel in religious devotees trying to force the hand of God.

James Rollins is the #1 New York Times bestselling author of international thrillers that have been translated into more than 40 languages. He lives in the Sierra Nevada mountains. You can find out more at www.jamesrollins.com. Photo by David Sylvian

I received a complimentary egalley of this book from the publisher. My comments are an independent and honest review.
Posted by Joan Nienhuis at 11:01 AM