The Blue Cloak by Shannon McNear 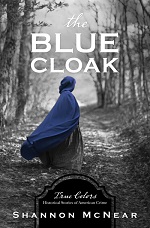 McNear warns readers in the Introduction to her book that this is a darker novel than one usually sees in the Christian genre. But then, it is a novel based on the acts of America's first serial killers, the Harpes. The two men, brothers or first cousins, went on a killing rampage for several years in the late 1790s along the frontier in Tennessee. They killed men, women, children, burned homes, and more. They had with them three women. Two they had kidnapped. One, Sally, had legally married one of the Harpes, a marriage performed by her pastor father. She had no idea what she was getting into but found out all too soon.

This is a good historical novel. I am amazed how McNear wove together a fictional account around historical facts, facts she clarifies in a Historical Note at the end of the novel. She mentions how she had to separate fact from legend surrounding the Harpes. Records so old are often conflicting but I think she did a great job of creating an engaging narrative from the information she had.

Like McNear's warning at the beginning of the book, I'll warn sensitive readers. While there is nothing more gruesome than one sees on tv or in movies now, the murders and dismembering and other acts may be a surprise to readers of Christian historical fiction. Nothing is described in gruesome detail as McNear notes. She tried to portray the killings with as little detail as possible. But the evil deeds are there, nonetheless.

There is a strong Christian message permeating the plot. There are also many issues covered, such as Sally's misplaced loyalty to her husband, a loyalty firmly planted into women's heads during the time. This may not be the most pleasant novel of The True Color series I have read, but it is a good one.

Shannon McNear is a military wife, mom of eight, grandma of two and is a member of ACFW and RWA. Her first novella, Defending Truth in A Pioneer Christmas Collection, was a 2015 RITA finalist. She lives in North Dakota. You can find out more at www.shannonmcnear.com.

I received a complimentary egalley of this book from the publisher. My comments are an independent and honest review.
Posted by Joan Nienhuis at 11:00 AM