The Ministry of Healing Blog Tour 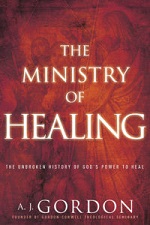 Classic Christian author A. J. Gordon expresses curiosity about whether the healing miracles from the Middle Ages up to his day can be verified as a continuation of Christ’s Spirit in the church. Through deep study and inquiry of the established history, Gordon concludes that the power to heal followers remains with the church—there was no special era of miracle working. God and His powers remain the same in the modern era as they have right through human history. For Gordon, God’s intervention in the suffering and sickness of His followers is frequent; the will of the Lord however is variable—but He will not prolong the pain of someone whose illness is too great. Throughout this text, A. J. Gordon makes his argument from a biblical perspective, citing passages in both the Old and New Testament that support the continuation of spiritual gifts. Quoting testimonies of believers across the ages, he offers a convincing argument that the church ministry is, to this day, one of healing.

This book was written over a century ago and takes some concentration to assimilate. Nonetheless, it is a good addition to the evidence God still heals today. Gordon argues that physical healing is certainly no greater a miracle than healing and restoring the spirit at salvation. He proves the continuation of miracles from Scripture. He reviews evidence from early Christian writers and various movements, such as the Moravians and several missionaries. He includes a number of personal accounts of healing too. The theologians and individuals Gordon mentions will most likely be unknown to modern readers.


This is a good book for the serious reader interested in additional documentation for the continuation of healing miracles throughout the history of the church.

Adoniram Judson (A. J.) Gordon (1836–1895) came to prominence in the United States as the evangelical pastor of Clarendon Street Baptist Church in Boston for more than twenty-five years. During his tenure there, he saw the church completely transformed into one of the most spiritual and aggressive churches in America, with an unsurpassed effort in missions. A missionary training school and publishing house were associated with the church, and Gordon preached at many of D. L. Moody’s Northfield Conferences, along with other notable preachers such as A. B. Simpson, A. T. Pierson, and R. A. Torrey. His training school eventually became Gordon-Conwell Theological Seminary, in South Hamilton, Massachusetts. He also founded Gordon College, in Wenham, Massachusetts. He wrote his most famous book, The Ministry of Healing, in 1882, but he also wrote at least fifteen hymns, including “My Jesus, I Love Thee,” as well as other books of Christian instruction.

This classic Christian work has previously only been self published. Gordon is renowned as founder of Gordon-Conwell Seminary and Gordon College. His writings became foundational work for what later became the spirit-filled movement.

oozing colour off the page ! Your book is very striking and having a few more reviews would really be a game-changer. Try usabookreviewers.com If I can interest you in a book trailer, let me know. I can do 1 for free !

Thanks so much for sharing a book description and giveaway also. Sounds great!

I don't typically read nonfiction. This one sounds like it would be good to have in a church library.