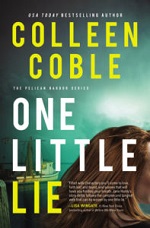 It started with one little lie. But Jane Hardy will do everything in her power to uncover the truth in this gripping new romantic suspense.

Jane Hardy is appointed interim sheriff in Pelican Harbor, Alabama, after her father retires, but there’s no time for an adjustment period. When her father is arrested for theft and then implicated in a recent murder, Jane quickly realizes she’s facing someone out to destroy the only family she has.
After escaping with her father from a cult fifteen years ago, Jane has searched relentlessly for her mother—who refused to leave—ever since. Could someone from that horrible past have found them?
Reid Bechtol is well-known for his documentaries, and his latest project involves covering Jane’s career. Jane has little interest in the attention, but the committee who appointed her loves the idea of the publicity.

Jane finds herself depending on Reid’s calm manner as he follows her around filming, and they begin working together to clear her father. But Reid has his own secrets from the past, and the gulf between them may be impossible to cross—especially once her father’s lie catches up with him.

There are many interesting aspects to this good mystery. There are insights into the long lasting effects of being raised in a cult. There is the whole issue of lies and whether it is appropriate to lie to keep another person from hurting. Then there is the difficulty of forgiveness. Even though this novel is basically a police procedure mystery, there are a number of subplots that keep the story interesting and moving at a good pace.

Because of the many spiritual and relationship issues, the novel is mostly character driven. Even so, this is a good mystery with many possible suspects and a good twist near the end. The plot is very complex and at times seemed almost unrealistic. Coble is good at crafting a complex plot, however, and it kept my interest. The only flaw, I felt, might have been that the villain's motive and ultimate evil desire was not set up well enough.

This novel is the first in a two part series so be prepared to be left hanging. I think you will find the characters interesting enough that like me, you will be waiting for the sequel coming out later this year.

Best-selling author Colleen Coble’s novels have won or finaled in awards ranging from the Best Books of Indiana, the ACFW Carol Award, the Romance Writers of America RITA, the Holt Medallion, the Daphne du Maurier, National Readers’ Choice, and the Booksellers Best. She has over 2 million books in print and writes romantic mysteries because she loves to see justice prevail. Colleen is CEO of American Christian Fiction Writers. She lives with her husband Dave in Indiana. You can visit her website at http://colleencoble.com.

I received a complimentary egalley of this book through Celebrate Lit. My comments are an independent and honest review. The rest of the copy of this post was provided by Celebrate Lit.
Posted by Joan Nienhuis at 6:07 AM