A Bad Day for Sunshine by Darynda Jones 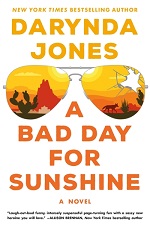 This is the best novel I've read in a long time, maybe years. It's hard to say which I liked better, the plot or the characters.

And the characters. Sunshine and her daughter are very well crafted. I loved the relationship the two had, the love, the quips, the devotion, the patience. It was amazing to experience the interaction between the two. And there are plenty of other interesting characters too, all serving well to flesh out the story with entertaining color.

Other areas of the novel I really liked include the dialogue. It was well designed, sometimes snarky, sometime dramatic, sometimes informative, always well crafted. I liked how actions and attitudes were revealed. Here is an example: “...his gaze locked on to her as though he were contemplating inviting her to dinner. Or cooking her for it.” (Loc 1900/5662) I like how the large amount of backstory was seamlessly woven into the plot.

I really liked this book. This is how I think a novel should be written. I was captivated by the plot and characters. There were times I laughed and times I fought tears. While the plot in this novel is complete in itself, we are set up at the end of the book for a sequel. Bring it on soon, please, as I'm waiting for it.

You can watch the book trailer here.
You can read an excerpt here.

Winner of the 2009 Golden Heart® for Best Paranormal Romance for her manuscript First Grave on the Right, Darynda can't remember a time when she wasn't putting pen to paper. Darynda Jones lives in the Land of Enchantment, also known as New Mexico, with her husband of more than 25 years and two beautiful sons, aka the Mighty, Mighty Jones Boys. Photo by Donita Massey.

I received a complimentary egalley of this book from the publisher. My comments are an independent and honest review.
Posted by Joan Nienhuis at 6:31 PM