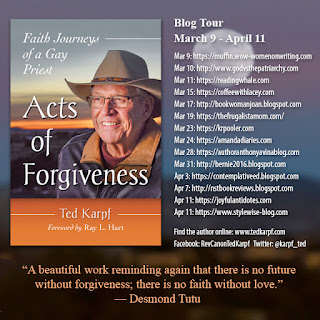 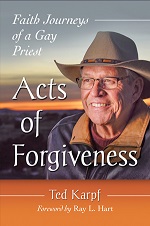 In 1980s America, coming out as gay as a father and husband was a significant journey for anyone to make. Coming out as gay as a priest guaranteed immersion into controversy, contradiction, and challenge. This book tells of the Reverend Canon Ted Karpf's navigation of new social and romantic journeys, all within the context of his priestly vocation in the Episcopal Church.

Covering from 1968 to 2018, Karpf recounts his vivid memories, life-changing dreams and resonant reflections on living a life of faith in a socially and politically tumultuous period. His narratives are crafted as poetic meditations on enduring values and meaning, which can remind any reader that we are neither abandoned nor alone, and that forgiveness is a fulfilling way of living in a world of contradictions.

You can buy the book here.
You can read thee reviews on GoodReads here.

Karpf has written an intensely reflective memoir of his life as a religious gay man, eventually finding his ministry home in the Episcopal Church. Abused as a child, he spent a life time figuring out who he was and his role in serving God. Readers are taken through Karpf's reflections on his marriage and divorce, gay relationships, occupations and ministry opportunities.

This is not a book evangelical Christians will appreciate. Karpf embraced process theology, a theology that rose from the philosophical thinking of Alfred North Whitehead, not Scripture. (103) Of his own theological belief, Karpf says, “It is not a matter of heaven and hell, which was an ancient teaching of cultural mythology...” (146) He writes of the “Christian tradition” as if it is one of many spiritual paths.

Karpf has been in therapy off and on for three decades and I suspect he wrote this memoir as a cathartic or introspective exercise. He writes that his need to tell his story was two-fold. He first needed to find where he was in his own process. He secondly desired to give the shape and meaning of his story to his friends, colleagues, etc. (142) He also says he has written this book to clarify his values, to re-enter his story of becoming worthy in his own eyes, and share his journey so “others know they are not alone in their struggles and speculations.” (142) I sometimes thought Karpf had a victim mentality. He writes, for example, “Each significant person in my life”... inflicted “hurt and outrage.” (27)

Readers who want to understand the experiences of a man coming out as gay in the context of ministry will appreciate this book. You'll get a good dose of reflective introspection from a man who desires to know God and fully live into the heart of God. You'll experience his struggles with forgiveness, his battle to understand his calling, his continued search for identity, and his continued analysis of his thoughts and feelings. The memoir is written topically rather than chronologically, something I found at times confusing and repetitive.

Ted Karpf is a priest, public servant, international diplomat, journalist, university administrator and educator. He was educated in New York, Texas and Massachusetts. A gay man, Ted is a father and grandfather. He has been and remains a man who reflects the times in which he has lived while offering a hopeful vision for the future. Ted watches clouds and tests the winds and prays while residing in Santa Fe, New Mexico. Photo by Rick Saul.

Thank you for your careful read of my book, Acts of Forgiveness. I am touched that you reached into the pain and limitations, but perhaps overlooked the affirmation. Though not a traditionalist, I remain with the expanse of the tradition of faith, reason and experience informed by revelation and scripture and attested to in the experience of others. The magnitude of forgiveness is commensurate with the understanding and acceptance of the contradictions with one's life. Thank you again for your read and recommendation.