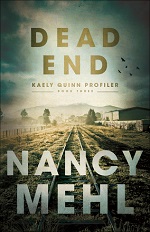 When a body is discovered in a field in Iowa, the police uncover fourteen additional corpses, some from twenty years ago, others from the recent past. The remains point to a serial killer with an MO the authorities have seen before – Ed Oliphant, a man who has been in prison for more than twenty years . . . and is FBI Special Agent Kaely Quinn's father. After several failed attempts to discover if Ed has been training someone to be a copycat killer, the police turn to Kaely in St. Louis for help.

Kaely promised herself she would never step foot in her hometown or set eyes on her father again. She's always refused to confront her past, but if she wants to prevent any more deaths, she must come face-to-face with the man she's hated for years.

As more bodies are discovered, Kaely races against time and her own inner turmoil to uncover the killer. Will this most personal case yet cost Kaely her identity and perhaps even her life?

Mehl's novel has a definite emphasis on character growth. There is really no suspense until near the end. Much of the book deals with Kaely's inner battles about her killer father, such as guilt. She also battles a feeling she will die young, something from childhood combined with a threat from an evil man she confronted in her FBI work. She also struggles with her faith, wondering if it is enough to get her through the hard experiences she anticipates coming.

There are several other psychological themes explored. What makes a serial killer, a psychopath? How do childhood experiences play a part? What part does the devil have in it? How does one handle anger toward God because of personal tragedy?

This is an interesting book for readers who like to get in the minds of main characters since suspense appears only near the end. There are good explorations of many themes involving evil behavior, its causes and cures and healing from its effects. While the edition I read contained no discussion questions, I think this book contains much to think about and discuss.

Nancy Mehl is the author of more than 35 books and a Christy Award and Carol Award finalist as well as the winner of an ACFW Book of the Year award. She and her husband make their home in Missouri. You can find out more at www.nancymehl.com. Photo by Ginger Murray Photography.

I received a complimentary egalley of this book from the publisher. My comments are an independent and honest review. The rest of the copy of this post was provided by the publisher.
Posted by Joan Nienhuis at 10:54 AM

magical ! Your book can be in the best seller list with a little push. Try usabookreviewers.com for reviews and marketing. I can also help create a free marketing strategy specific to your genre and book.