The Rogue by Lee W Brainard 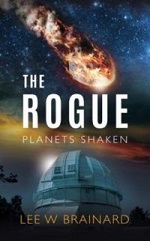 I enjoyed this novel centered around biblical prophecy and an approaching asteroid. The U.S. government silences anyone reporting on the approaching and very dangerous object under the guise of preventing panic while preparations are made. The stakes are high as one evangelical feels she must make the asteroid's approach public. She may be incarcerated in a FEMA retention camp for her efforts. The narrative follows two other people subsequently involved in her dilemma.

There are some interesting explorations of controversial astronomical ideas, such as false assumptions regarding the red shift and the expansion rate of the universe. There are also interesting ideas about biblical prophecy and the possible role of an asteroid. And there is plenty of secretive action and subsequent suspense.

There is much to think about in this novel. Just what responsibilities do Christians have making sure the truth is known? When is disobedience to the government right?

The novel is informative too. I really liked Brainard's attention to detail, including topics of astronomy and prophecy and even fly fishing and mountain camping. His writing style is very good. Even though there were long passages of prose in between the action or dialogue scenes, they were very interesting.

This is a good novel for readers who enjoy possible narratives of the coming end days. The novel leaves us hanging so I will be looking for the sequel.

Lee W Brainard is a Bible teacher and author. His passions include the original languages of the Bible, prophecy, and the various aspects of apologetics. He also enjoys mountains, mountain climbing and backpacking, the northern lights, and the stars. He and his wife live in Harvey, ND where he shares in the ministry of the Word at Harvey Gospel Chapel. have three married children. You can find out more at https://www.soothkeep.info/

I received a complimentary egalley of this book through NetGalley. My comments are an independent and honest review.
Posted by Joan Nienhuis at 5:39 PM