The Traitor's Pawn by Lisa Harris 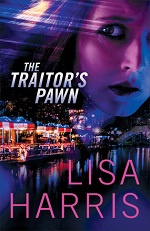 When FBI agent Jack Shannon arrives in Corpus Christi, Texas, he is focused on one thing: find the man who has been selling encrypted government secrets to the Chinese. But when a senator is shot during a hunting trip and the woman he was with is abducted, Jack agrees to join the search – especially when he discovers that the kidnapping victim is Aubrey Grayson, a woman he was once in love with.

As the search continues, it becomes clear the senator may not have been the intended victim – and Aubrey may be connected to the other case Jack is supposed to be working on. Can Jack untangle the knots before it's too late? And when he learns the truth, will it be too painful to get past?

I like that this novel gets going right away with action and suspense as Aubrey is kidnapped. The suspense is well distributed through the novel and balanced with character ruminations and development. Aubrey is a heroine struggling with inner battles, especially toward her father. Those struggles come to be very important as the plot develops.

And that plot is a bit complex. We readers are not sure who abducted Aubrey or why. There's a traitor selling secrets to foreign governments that Jack is investigating but there were so many red herrings and conflicting evidence that I was unsure of who it really was until the end. Unfortunately, there were some areas in the book that did not seem to be realistic, such as Aubrey and Jack out driving on their own when there had been two attempts on her life. That Aubrey would even be allowed to work on the case seemed odd.

I liked the novel in general. It is a good exploration of relationships in the context of suspense. Aubrey loved the senator like a father as he had taken her in when her own father had abandoned her. Now she must face her real father and find out if he is who he says or who the FBI says he is. And Aubrey must come to grips with her feelings for Jack. All in all, a good suspenseful novel with action and character thought in good balance.

Lisa Harris is a bestselling author, a Christy Award winner, and the winner of the Best Inspirational Suspense Novel from Romantic Times for her novels Blood Covenant and Vendetta. The author of more than forty books, including the Nikki Boyd Files and the Southern Crime series, as well as Vanishing Point, A Secret to Die For, and Deadly Intentions, Harris and her family have spent over sixteen years living as missionaries in southern Africa. Learn more at www.lisaharriswrites.com.

I received a complimentary egalley of this book from the publisher. My comments are an independent and honest review. The rest of the copy of this post was provided by the publisher.
Posted by Joan Nienhuis at 2:18 PM