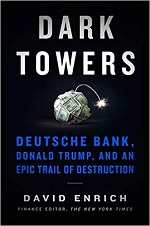 This is a very readable and troubling account of the rise and fall of Deutsche Bank. It shows the drive of institutional greed and taking huge risks, such as on derivatives, to make money. It reveals how one arm of the bank loaned Trump money when he was in default of a multi-million dollar loan to another arm of the bank. The loan from the private banking arm allowed him to pay what he owed to the investment banking division. It records how Trump defaulted on junk bonds Deutsche had helped sell to try to keep his casino afloat. It records how Deutsche Bank was the only one who would deal with Trump because his record of payments was so dismal. It reminds us of the bank reporting suspicious activity in 2016 as Don Jr. moved funds to a number of Russian individuals at the same time Russia was interfering with the U.S. presidential election. (311,312) It reveals the panic bank officers experienced when they realized a man deeply indebted to them had just been elected president of the U.S.

This is a sobering account of big money and influence. It is a startling story of some lives being ruined while others, such as Trump's, were propped up by continual loans. I highly recommend it.

David Enrich is the finance editor at the New York Times. He previously was an editor and reporter at the Wall Street Journal in New York and London. He has won numerous journalism awards, including the 2016 Gerald Loeb Award for feature writing. He grew up in Lexington, Massachusetts and graduated from Claremont McKenna College in California. He lives in New York with his wife and two sons.