The Stolen Girls by Patricia Gibney 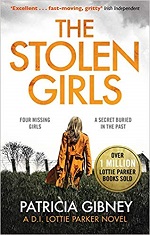 I had some difficulty becoming engaged with this novel. It is the second in a series, the first of which I have not read. Quite a bit of the personal interaction between the detectives in the police force is a result of happenings in the first novel so I was a bit lost there. The novel takes place in Ireland but I felt the setting was not established well, perhaps again from missing the first novel.

I really had trouble liking the lead on the murder investigation, Detective Lottie Parker. She was not the strong kind of heroine I like. She did not relate well to her children and she was often rude and disrespectful to her co-workers. She is not the kind of lead character about which I would like to read more novels.

The investigation takes Detective Parker into dark areas of mankind I wish did not exist, like human trafficking and organ theft. The plot progression was steady but the unlikable character and dark subject matter made me think I'll not read more in this series.

Posted by Joan Nienhuis at 9:12 PM