Blaze of Light by Marcus Brotherton 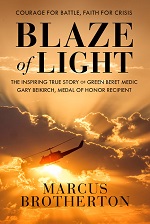 For fans of Unbroken and Hacksaw Ridge comes an incredible true story.

After dawn the siege began. It was April 1, 1970, and Army Green Beret medic Gary Beikirch knew the odds were stacked against their survival. Some 10,000 enemy soldiers sought to obliviate the 12 American Special Forces troops and 400 indigenous fighters who stood fast to defend 2,300 women and children inside the village of Dak Seang.

For his valor and selflessness during the ruthless siege, Beikirch would be awarded a Medal of Honor, the nation's highest and most prestigious military decoration. But when he returned to the States, he faced his most difficult fight yet. To conquer the battle at home, he chose an unlikely solution—one that involved the harsh wilderness of the northern Appalachians and an indomitable will to survive.

Blaze of Light is a powerful story twice over—for the tale it tells and for the redemption it surfaces. It’s the kind of story you read and then pass along to a friend, a story that nudges its way into your soul to heal your own wounded spirit.

Brotherton has created a very readable and engaging account of Beikirch's experiences.

There were the physical struggles. At one point, surgeons managed to remove seventeen pieces of shrapnel from his back and a rusty nail from a jerry-rigged NVA claymore mine that had lodged near his kidneys. Yet thirty-four additional pieces of shrapnel, seen in X-rays, still needed to be removed. (141) He had an ileostomy for some time, allowing what was left of his intestines to heal.

There were the psychological struggles. I cannot imagine the interior battles Beikirch experienced after seeing the horrors of that war. Then there were the hurtful comments made by people when he returned to the U.S. There were nightmares and flashbacks. There was anger, alcohol, and drugs. Peace only came when Beikrich surrendered his life to God.

Beikirch no longer tries to forget. “He knows the scars of the Vietnam War will always remain. Yet Gary has used his scars to develop a passion for helping people heal and thrive.” (236)

This book is an encouraging account of one man moving through the obstacles he faced. He had the help of many others and of the life transforming God. I recommend the book to readers who are looking for an encouraging story to inspire them to continue on to victory. 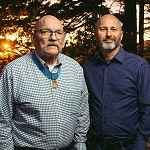 Marcus Brotherton is a journalist and professional writer, known internationally for his literary collaborations with high-profile public figures, humanitarians, inspirational leaders, and military personnel. He is the author of the national bestsellers A Company of Heroes, We Who Are Alive and Remain, Shifty's War, and the coauthor of Call of Duty with Lieutenant Lynn "Buck" Compton. He has won the Christopher Award for literature that “affirms the highest values of the human spirit.”

I received a complimentary copy of this book from the publisher. My comments are an independent and honest review. The book synopsis and author information were provided by the publisher.
Posted by Joan Nienhuis at 10:35 AM