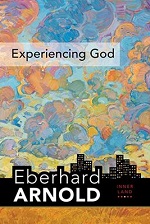 This was not an easy book for me to read. Arnold's writing style is very philosophical in nature. His ideas are not as clearly articulated as I am used to. I can tell this work is nearly a hundred years old. It is not presented in such a flowing manner as modern works are. This book is based on a English translation from the German done in 1975 which may also account for some of the style of the text.

Arnold was a popular speaker and author in Germany. After WW I, he became disillusioned with the establishment, such as the church. He took his family away from Berlin and a life of privilege and moved to a village. With other like minded Christians, an intentional community based on the Sermon on the Mount was formed, eventually becoming known as the Bruderhof.

This book is a part of Arnold's work. He emphasizes being with God as how we can withstand what storms us. God wants to be known but the idea terrifies us. Nonetheless, we are to be completely open to Him. Even though God is totally other, we become the humans we were created to be when we know God. Only in knowing God can we truly live life and experience true peace. Arnold helps us see how we know God through Creation and through Jesus Christ. He also encourages us to live as a result of knowing God, a sacrificial and giving life.

I appreciate that, even though Arnold lived in an intentional community, he did not advocate exclusion from the world. The Christian life is not to be one of withdrawing but one of gaining the inner strength of character needed to live in the world. Living the Sermon on the Mount will develop that character and be evidence to others of true peace.

“The world situation today calls for the kind of dedication that lives in Christ alone, in the heart of the powerful God of Jesus Christ.” (Loc 571/1412) The strength of perfect love is needed to penetrate this devastated world.

This book is not for the weak of intentional effort to understand and gain from its content.

At the time of this review, the ebook was a free download at Plough Publishing House.

Eberhard Arnold (1883-1935) studied theology, philosophy, and education at Breslau, Halle, and Erlangen, where he received his doctorate in 1909. He became a sought after author and speaker in his native Germany. He was active in the German Christian Student Union and became literary director of the Furche Publishing House in Berlin. He became disillusioned with the failure of the establishment, especially churches, to provide answers for the problems after WW I. In 1920, the Arnolds, along with their five children, moved to the small German village of Sannerz. With other like minded Christians, they founded an intentional community. It supported itself with agriculture and a publishing house. The movement grew into the international communal movement known as the Bruderhof.

I received a complimentary egalley of this book from the publisher. My comments are an independent and honest review.
Posted by Joan Nienhuis at 8:58 AM