Anointed With Oil by Darren Dochuk 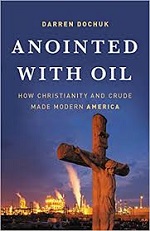 How the concept of capitalism and free market economy became such an integral part of evangelical Christianity had been a mystery to me. There was certainly nothing in the Bible advocating or promoting big business and huge profits.

This book helped me understand the influential role oil barons played in the evangelical movement. I was made aware of the idea that oil was a natural resource God had given to America. Oil magnates considered themselves true patriots, using their profits to assure Christian culture and capitalism did not fall in the face of foreign influence. So big was the influence of oil money that World Wide Pictures (Billy Graham) made their first movie (Mr. Texas,1951) about a rancher turned oil man who found peace in Christ. The second movie was called Oiltown, U.S.A.

I even found out how the big business of oil turned toward the Republican party. When Democrats in power put restrictions on oil production, Republicans rose in anger, supporting the profitable oil industry. Eisenhower, developing the God and country and God and business themes, gave out oil grants. The relationship was cemented as oil money supported missionary work. Oil companies promoted themselves as the ultimate example of American free enterprise, especially against the threat of communism.

This is a huge book with just short of 600 pages of text and another 100 pages of notes. I am glad I could extend the check out time at my local public library. I am glad I read it as it helped me understand much better the current close relationships between capitalism, the Republican Party, and evangelical Christians.

Darren Dochuk is associate professor of history at the University of Notre Dame and a prize winning author of From Bible Belt to Sunbelt. He has edited several books on American religious history. Born in Alberta, he now lives in South Bend, Indiana.

In this world of constant competition, it is difficult to survive as a self-pub author. Every detail matters and getting reviews is a big part of my marketing strategy. I ordered a few reviews from https://100freekindlereviews.com to get more visibility and sales this Christmas season..