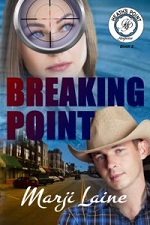 Can the mere rumor of treasure can change lives, destroy friendships… even kill?

Alynne Stone’s planned out and predictable life ended when she hurried to her mother’s side to support her during a family tragedy. So why would she now have a target on her back? Her father’s death had nothing to do with her, but suddenly she’s having these “accidents”? How can she stay and support her mom when someone is intent on eliminating her?

Police Lieutenant Jason Danvers believes her father was murdered. How, he can’t fathom, but he also can’t ignore the details that don’t add up. Attempts on Alynne’s life must be somehow connected. Still dealing with the pain of his own wife’s death, he can’t allow an innocent woman to die on his watch. Especially one as scintillating as Alynne Stone.

Even in a small town, things—and people—aren’t always who they appear to be.


I enjoyed this romantic suspense. The plot revolves around many issues, such as family relationships, loyalty and greed. The family had many secrets that were not revealed until near the end of the book. That made the behavior of some of the characters puzzling until all was known. Laine did a good job developing many of the characters, especially the irritating ones. I was a bit disappointed in Alynne, the heroine. She was a researcher for a legal practice, yet she naively accepted some people without even questioning their background or character. That did not seem consistent to me. I would have preferred a more savvy female lead, one more actively involved in solving the mystery, but that's just me.

The novel has a good message of Christian faith, especially about forgiving ones self for past sin.

Marji Laine has completed seventeen years of homeschooling, but with her publishing business, her various volunteer activities, and her large family, she will likely never live a life of leisure. And that suits her just fine! When she does find spare time, she enjoys watching sports and Hallmark movies and mysteries, loves having game night with her family and friends, and enjoys talking “shop” with other authors. You can usually find her in her favorite recliner, plucking away at her keyboard with her rescue fur-babies at her feet or at www.MarjiLaine.com.


It Started with a Dream You know how just before you actually wake up, you sometimes have dreams that stay with you? I’ve recently chatted with a lady who had a dream about her husband and woke up mad at the man without realizing that her discontent was from a dream. Dreams are powerful, amplified thoughts that can move us to unexpected emotions and actions. Such was the case with me. My latest release, BREAKING POINT, actually stemmed from a dream. I had a scene in my sleep of a woman trapped on the roof of a beautiful, three-story, Victorian house, having crept out the window of one of the second floor gables. A storm whirled around her, slapping her brunette hair across her eyes and into her mouth. She was afraid of something. Then I saw the something… or rather the someone. A hand raised above the eave of the roof. A man’s gravelly voice, “I know you’re up here.” Lightning flashed revealing the top of his head as he climbed onto the window sill from which she had escaped. His left hand gripped the eave of the roof, likely holding onto the gingerbread décor that laced the edging. The woman had nowhere to go, no other place to hide. Thunder jarred the air and rumbled across the ground. The woman stiffened, but not from the explosive sound. The man’s eyes appeared over the rooftop. “There you are.” This was it. She had no hope of survival. After all she’d done to avoid this moment. He leaned to his left to pull his right hand over the edge of the roof. A murderous glint filled his dark eyes as a smile stretched his lips. The barrel of a gun appeared, cresting the roof. Then a loud crack split the night. Not thunder. The man’s smile disappeared as his mouth fell open and his eyes widened. He dropped the gun and grabbed at the surface of the shingles with both hands. The woman had climbed up the side of the gable up to the top of it. The surface didn’t offer a finger grip anywhere. The gingerbread must have broken, giving the man no handhold. With a prolonged yell, the man’s face and hands disappeared from view. A close lightning strike and the thunderous result covered the sound of the man hitting the ground below. This scene, from a dream, was where the story BREAKING POINT began. It was actually the very first novel I ever completed. However, after no less than five total rewrites where I changed every aspect of the story except the hero, heroine, and the setting – the beautiful Victorian house – that scene didn’t make it to the book at all. Maybe it will find itself in a new story someday!

I received a complimentary digital copy of this book through Celebrate Life. My comments are an independent and honest review. The rest of the copy of this post was provided by Celebrate Lit.
Posted by Joan Nienhuis at 6:36 AM

I like the cover and synopsis. This sounds like a good read. Thank you for sharing your review and the book and author details

Bluebonnets are so beautiful. Are they a part of the story?