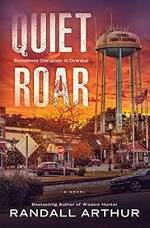 Randall Arthur is one of my favorite authors. He is a master at creating thought provoking plots and developing engaging characters, all wrapped up with well crafted writing. He did not disappoint me in this novel.

Arthur centers his plot on the contemporary issue of women pastors. When one is forced on a conservative church in a small Georgia town, tempers rise and sides are drawn. “So, was she a voice of Satan that mastered in deception? Or was she a voice of God that shattered lies and defended truth?” (186) Arthur counters that issue with the plight of women having genital mutilation forced on them in an African Muslim country. The relating of male domination of women in some areas in America and an African country was thought provoking for this reader.

There are additional social issues rounding out the plot. Race is one, including bi-racial marriages and including non-whites in a conservative church that had been all white since its inception. Forgiveness is another big issue as is biblical interpretation and accepting social change.

I highly recommend this novel. The plot may well challenge some of your preconceived ideas about Christianity and how a church is to function. The characters may well engage your emotions so that you see strangers in a new light. This novel may well inspire you to change for the better.

Randall Arthur and his wife have been career missionaries since 1975, planting churches in Oslo, Norway; Munch, Germany; and Berlin, Germany. He has also coordinated and led over 100 short term mission trips. He wrote his first novel, Wisdom Hunter, in the late 1980s. The novel was controversial, challenging legalistic Christians. His goal as a writer is to rip the mask of pretense from American Christianity and present stories portraying true life struggles, thoughts, reactions, and journeys.

I received a complimentary copy of this book from the author. My comments are an independent and honest review.
Posted by Joan Nienhuis at 12:48 PM