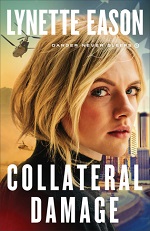 Eason has done a good job combining nefarious actions in Afghanistan with a murder investigation in the States. While the two separate story lines might be puzzling at the beginning, the connection becomes evident as the plot progresses. The connection comes through women who knew each other in Kabul, two of whom have returned home.

I like Eason's way of including several issues in the novel. An important one is post traumatic stress. Brooke had counseled American soldiers in Kabul. Barely surviving a bombing, she is now in private practice but still deals with memories and some residual effects of the trauma. Another issue is friendship. Brooke finds a friendship nearly destroyed when she misinterprets the actions of another. Faith in God's protection is an important element of the plot as is a budding romance.

There is plenty of action in this novel. It starts with danger in Afghanistan and Brooke nearly being killed. Yet her return to the States does not guarantee safety as she soon finds herself in serious danger.

I enjoyed the novel. Eason brings the many elements together well and provides readers with plenty of suspense. This book is the first in a new series and I'll be watching for the next one.

Lynette Eason is the author of several novels of suspense. She is the winner of three ACFW Carol Awards, the Selah Award, and the Inspirational Reader's Choice Award, among others. She is a graduate of the University of South Carolina and has a master's degree in education from Converse College. She lives in South Carolina with her husband and two children. You can find out more at www.lynetteeason.com. Photo credit: Mary Denman.

I received a complimentary egalley of this book from the publisher. My comments are an independent and honest review.
Posted by Joan Nienhuis at 5:24 PM

This is next on my list! I know that she used Afghanistan in her book because she knows some soldiers over there and knew she would get good info on the area which I think is cool! I am currently reading Jacquelyn Lynn's book Choices. It's fantastic, Christian Fiction is one of my fav genre's and she is quite possibly my fav author. An amazing writer and her books show it!