Messing With the Enemy by Clint Watts 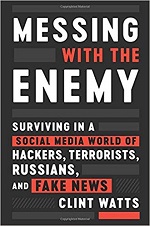 I appreciate Watts' understanding of the use of social media for propaganda and other influence. I was not as interested in his personal accounts of his dialogue with terrorists as I was with information on Russia. I now understand how Russia became so much better than the U.S. at using all aspects of media.

A few surprising concepts for me. I was shocked how Putin's favorability among Americans recently doubled in two years. (175) I am amazed how propaganda can be targeted. (I am not sure I am going to “like” anything on Facebook any more.) What a disappointment to find, “America sucks at information warfare, absolutely sucks.” (189) America is not only lacking in a message that resonates but also in an effective way to deliver that message. (192) And unwitting Americans fall for Kremlin's message time after time. (193)

America was caught off guard by foreign experts in social media propaganda. It is scary to think of the little being done to correct that. Defense contracting has been less about getting the job done than getting money to certain people, such as former military and intelligence officers. (206) The billions of dollars spent by the U.S. is still not as effective as the adversaries low budget operations. (207) It is embarrassing. Watts argues that the Department of Homeland Security should notify the public of falsehoods and smears regarding domestic issues and the State Department should do the same about falsehoods related to U.S. foreign policy. (209) But they don't so we common citizens get duped.

I recommend this book. There is much to wade through to get to the good points, but it is worth it. Watts gives great techniques for testing social media posts for their truthfulness.

Clint Watts is a Robert A Fox Fellow in the Foreign Policy Research Institute's Program on the Middle East as well as a senior fellow at the Center for Cyber and Homeland Security at George Washington University.