Running Against the Devil by Rick Wilson 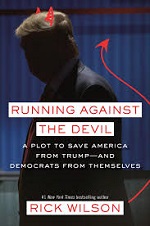 Wilson doesn't like Trump, at all. The strong language he uses surprised me. I didn't know a publisher would allow some of the words to be in print. Nonetheless, I was interested in this book because Wilson had been active in Republican presidential campaigns. He is dismayed the Republican party has now become a party of Trump. And let me say again, Wilson has nothing, and I mean nothing, nice to say about Trump. Wilson has not become a Democrat but he does have a great deal of advice for Democrat presidential candidates. He has been a strategist on Republican candidate trails so he knows the techniques, those to watch out for on the Republican side and those to implement on the Democrat side.

I think I understand better what is at stake in the 2020 presidential election. I also understand what Republicans will push and what Democrats need to do counteract it and ultimately win the presidency. I understand the solid red and blue states are to be pretty much left alone. Money and effort will probably not change the voters' minds. The swing states are where the action needs to be. It is all about the electoral college and developing a strategy based on it.

This book was also very insightful as to how Trump has used Christians. “Trump has transformed the evangelical movement into a more cruel and worldly political tool, validating and verifying their two most powerful desires. (272) First, Wilson says, Trump has allowed evangelicals to live in an intolerant society. Trump has also provided evangelicals with a golden calf, one they can worship. Evangelicals have been “swept up in the delights of political power on this mortal plane and, with Trump as their prophet, have transformed into something unrecognizable.” (273)

I recommend this book but with a warning to rather conservative readers like me. Be prepared for strong feelings and strong language. But also be prepared to understand a bit more the political situation we are in and the prospects for the future.

Rick Wilson is a renowned Republican political strategist, writer, speaker, commentator, and ad-maker. He has an award-winning column in The Daily Beast and writes for several other publications. He regularly shares his insights on CNN and MSNBC and NPR. He and his wife life in Florida and have two grown children.