Win Your War by Mark and Grace Driscoll 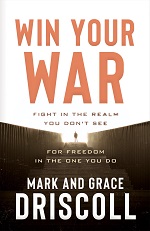 Many Christians ignore the reality of unseen spiritual beings. The Driscolls remind Christians angels and demons are real and spiritual warfare is a reality. They explore angles, what they are like and what they do. They also look at the existence of evil, the reality of spiritual warfare and the Christian's authority. They give biblical insight on a number of topics like pride, sickness and healing, forgiveness and specific spiritual battles, such as lies and coveting.

While I respect most of the Driscolls' teaching, there is one area where I feel they are entirely wrong: the critique of the trend to Reformed theology. Driscoll writes the trend toward Reformed theology is “in large part the world I would call the 'immature, hurt, and father wounded.' The trend toward Reformed theology is driven in large part by a generational father wound ...” (151) I feel this kind of rhetoric is uncalled for. Being a Reformed charismatic, I treasure the biblical nature of Reformed theology, as do many serious charismatic scholars, such as Sam Storms. Driscoll says this “father wound” leads to bitterness and the idea that the son can lead better than the father. (153) He says it may take the form of “a team member overtaking a leader in an organization.” (154) This makes me wonder if Driscoll's comments are from the wounds he suffered during his final time at Mars Hill Church in Seattle, when he was asked to resign.

Driscoll also says this father wound leads to a “prevalence of Son theology over Father theology... These sons with father wounds don't talk as much about God the Father as they do Jesus the Son.” (151) Imagine my surprise when I went to Driscolls' Scottsdale church web site and saw the bold slogan: “IT'S ALL ABOUT JESUS!” Later in his book, Driscoll writes, “Good doctrine stars with Jesus as your compass and cornerstone. ...once you get Jesus right, the rest falls into place.” (189)

I also found it interesting Driscoll says the “father wound” causes people to want to plant their own churches, rather than having older mentors in their midst. (159) It's interesting because that is what Driscoll has done, twice.

There is a great deal of good teaching in this book, especially for new Christians or Christians who have ignored the reality of spiritual warfare. The Driscolls generally teach from the Bible, adding their own experiences to illustrate the biblical principles. I advise to just skip the chapter on the father wound.

Mark and Grace Driscoll have been married and doing ministry together for over twenty-five years. They recently planted the Trinity Church in Scottsdale, Arizona. He was previously the pastor at Mars Hill Church in Seattle, Washington. He has a bachelor's degree in speech communication from the Edward R. Murrow School of Communication at Washington State University as well as a master's degree in exegetical theology from Western Seminary in Portland, Oregon. You can find out more at https://markdriscoll.org/

Beta-readers are indeed extremely important in your process. They will catch mistakes even you or a proofreader didn’t catch, and give amazing tips on how to develop further your story. I used https://honestbookreview.com to get a few reviews and also promote my book. Hopping to be in the top 100 genre lists and see better sales this Christmas season…