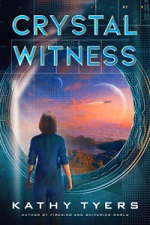 Her memories are blocked. Her freedom is gone. Her crime is a mystery.

When Ming Dalamani awakens from twenty years of suspended animation, she recalls only fragments of her former life: the life she led before she was arrested by the governing interplanetary corporation, Renasco, for a now unremembered crime.

Relocated to an alien world far from the only home she has ever known, Ming serves a powerful Renasco representative to repay her debt. But daily she lives with deadly threats from two men—the hideous mutant Zardir Huekk and the handsome, secretive musician Tieg Innig—who both want the same thing: information. Renasco-trained as a calligrapher in three dimensions, Ming begins to remember more: a clan, a mission, and interstellar piracy.

Ming must decide where her loyalties lie: with her powerful new employer, with a budding resistance movement… or elsewhere.

Having grown up reading lots of science fiction, I enjoyed this novel. I felt it got off to a bit of a rough start as the action in Part 1 did not connect to the next part for while. After the novel got going, however I really liked it, especially the suspense near the end.


I like the plot of one society being oppressed by another. I liked the characters and their development for the most part. As is the case with sci-fi, there were some weird characters, like the one with eyes that blink sideways. There is some advanced science but we are not overwhelmed with it. The characters form the majority of the plot framework and that was good. There is no particular spiritual emphasis but good and evil are well defined in the end.

I recommend this novel to sci-fi readers. I'll be reading more of this author.


In 1988, after the initial release of Firebird and Fusion Fire by Bantam Books of New York, my then-editor asked for a stand-alone novel, and my then-agent presented me with a contract to write that book in just over half the time that I actually needed. So my third novel, Crystal Witness, appeared in 1989—and while the plot had strong bones, I wished I’d had several more months to polish it. Much to my delight, Enclave Publishing is re-issuing Crystal Witness in June 2020 with the layers of polishing added. While I was adding those layers, I found myself wondering what would happen next. Maybe … oh, yes … hmmm … Aha!
Now that Crystal Witness is ready to stand up and sing, I am delighted to be working on a multi-book sequel series, The Sunstone Saga, also to be released by Enclave Publishing. Book 1 of the saga, The Long Silence, is well underway. It introduces a new cast of characters and asks a powerful question: Where has God been, while humankind went to the stars?
Crystal Witness is the story of young Ming Dalamani, who wakens from twenty years of suspended animation to find herself “company property” on a distant world, with no memory of the crime she must have committed. She only knows that a powerful corporate monopoly rules interstellar space, and she has been assigned to serve a company representative. Immediately, powerful (and opposing) individuals offer threats and bribes, trying to enlist her to spy for both sides of a deadly intrigue. How long can Ming play both sides of the plot against her urgent wish to find out who she is … and what was her crime?
My background in music and the arts always manages to show up in my books. I made Ming a calligrapher in three dimensions, wielding a set of injection pens to create elegant designs in clear slabs. Another character is a court musician with futuristic technology at his fingertips. My entire family was musical; my mother played in 20thCentury Fox’s prestigious sound stage orchestra in the 1950s, and my father grew up in a family band that toured the U.S. every summer. When I was widowed in 2004 and needed to make a fresh start, I discovered that Regent College in Vancouver BC had a program in which I could study toward a Master’s degree in Christianity and the Arts—and write a science fiction novel as part of my thesis project. That book, Wind and Shadow, picked up the Firebird series at Book 4 and led to its completion in Daystar, Book 5. That series is conclusively finished—as you know, if you have read Daystar!

Book Reviews From an Avid Reader, June 30
Fiction Aficionado, July 1
Where Faith and Books Meet, July 1
Texas Book-aholic, July 2
Inklings and notions, July 3
deb's Book Review, July 3
Worthy2Read, July 4
Truth and Grace Homeschool Academy, July 5
Blogging With Carol, July 5
For Him and My Family, July 6
Book of Ruth Ann, July 7
Mia Reads, July 7
Christian Chick's Thoughts, July 8
Through the Fire Blogs, July 9
Emily Yager, July 10
Hallie Reads, July 10
Adventures of a Travelers Wife, July 11
Breny and Books, July 11
amandainpa, July 12
Pause for Tales, July 13
The Artist Librarian, July 13
I received a complimentary digital copy of this book through Celebrate Lit. My comments are an independent and honest review. The rest of the copy of this post was provided by Celebrate Lit.
(My star ratings: 5-I love it, 4-I like it, 3-It's OK, 2-I don't like it, 1-I hate it.)
Posted by Joan Nienhuis at 6:13 AM

Hi. I'm a long-time follower of your blog. A friend of mine, Adam Ressler, just put his his first book, a short science fiction satire, up for preorder on Amazon. Would you be willing to post about it either during his $0.99 preorder or when it's released on the 17th? I can send you more info if you're interested. Sorry for doing this through a comment, I could not figure out how else to contact you. Thank you for your time.
Best wishes,
Daisy
twogalsandabook(at)gmail(dot)com