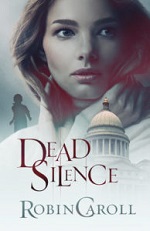 
Political games can be deadly…

Elise Carmichael is a court sign language interpreter who reads lips all the time. As a widow with a young son who is deaf, lip reading is simply second nature, until the day she reads the lips of someone on the phone discussing an attempt to be made on a senator’s life—a senator who just happens to be her mother-in-law. Before she can decide what she needs to do, she receives the information that her son is rushed to the ER and she must leave. Then she later sees the news report that her mother-in-law has been shot and killed. But when she comes forward, her life, as well as her son’s life, may now be in the crosshairs of the assassin.

I have read several of Caroll's novels and this one is not her best. On the positive side, I liked the relationship Elise had with her son. There is also a strong Christian message included. On the negative side, the plot was not very engaging. I knew who the bad guy was early on. No subtle hints there. I found it irritating that it seemed everything the FBI did was wrong. Elise and her sidekicks could find out much more information than the FBI, which seemed implausible. The husband of the murdered woman recalls a threatening phone call his wife had made a few days before her death but reveals it to Elise about two thirds of the way through the novel. He never thought to tell the FBI when they interviewed him? And there was a point when Elise wants to go over the time line so she and the others rehash all that has happened. That did not move the plot and seemed to only fill a few needed pages.


I have enjoyed other novels from Caroll and reading this one will not deter me from catching her next one.

“I love boxing. I love Hallmark movies. I love fishing. I love scrapbooking. Nope, I’ve never fit into the boxes people have wanted to put me in.” Robin Caroll is definitely a contradiction, but one that beckons you to get to know her better. Robin’s passion has always been to tell stories to entertain others and come alongside them on their faith journey—aspects Robin weaves into each of her twenty-five-plus published novels. When she isn’t writing, Robin spends quality time with her husband of nearly three decades, her three beautiful daughters and two handsome grandsons, and their character-filled pets at home. Robin gives back to the writing community by serving as executive director/conference director for ACFW. Her books have been recognized in such contests as the Carol Award, Holt Medallion, Daphne du Maurier, RT Reviewer’s Choice Award, Bookseller’s Best, and Book of the Year. You can find out more about Robin by visiting www.robincaroll.com.


Hi, there. . .Robin here. I’m getting so excited for the release of my thirty-fourth novel, DEAD SILENCE. I have to say, I love this book. The heroine is strong, yet flawed. Her love for her son—willing to do anything to protect him is a mother’s instinct I relate to so well, having three daughters and two grandsons. The love of a mother for her child is so ingrained in me that I wanted to share that in a story.

I’ve been asked why I opted for a heroine who is an ASL translator and who has a deaf son. Many years ago, I became friends with someone who is deaf. She shared with me some of her frustrations, but also how her way of life is in comparison to mine. It got me to thinking that being deaf could be thought of as a disability but could also be used as an advantage…it was all in how you looked at it. My friend shared many stories of how she “eavesdropped” by reading lips and learned much about people and how they reacted to issues, enough that it led her into her career field today—a counselor, specializing in providing therapy for the hearing impaired as they live in a hearing world. I hope that I portrayed my characters in this positive light.

While I’m a Louisiana girl at heart, I reside in Little Rock, the capitol city for Arkansas. Since Bill and Hilary Clinton lived here and claimed it home before Bill was President, we have many political plans and posturing here. I saw it as a perfect backdrop for this particular story with the political undercurrents running rampant throughout the story.

I hope that you enjoy reading DEAD SILENCE as much as I enjoyed writing it.

The cover looks so pretty!

Thank you for sharing your honest thoughts. I've not yet read her books.