The Sand Sea by Michael McClellan 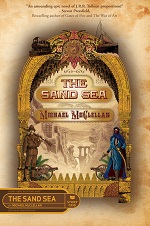 The Sand Sea takes place on an alternative Earth roiled by war and conquest that mirrors our own Gilded Age. The treasure that ignites greed and folly in this parallel world is not petroleum, but beserite—a mineral of immeasurable value.

Captivated by an ancient prophecy and the call of adventure, inexperienced nobleman and scholar Peter Harmon (think of a young Winston Churchill-like naif) joins an expedition to stake his nation’s claim to a global empire.
Harmon’s destination is a vast and inhospitable desert halfway around the world, dominated by the iron-fisted Grand Vizer Jemojeen Jongdar. A tyrant on a mission to secure the ancient and supernatural Staff of the Ram, the Lion, and the Serpent, Jongdar knows the truth that others can only imagine: The one who controls the staff will possess the power to rule the world.

Before he can seize his destiny, Jongdar must find and destroy the one person capable of thwarting his ambition, the rightful heir to the Sand Sea realm, an innocent woman named Selena Savanar.

Can the brave and indomitable Selena accept her true destiny and rally her people in the eye of a gathering storm? To do so will require her to outwit the man who burned her father alive and left her an orphan and beggar a lifetime ago. Or will Peter Harmon and the cadre of opportunists he rides with conquer the divided empire?

With the mythic structure of J.R.R. Tolkien’s The Lord of the Rings trilogy in a world as rich and real as George R.R. Martin’s Westeros, The Sand Sea is an immersive experience made to order for epic fantasy fans and anyone who enjoys grand-scale historical fiction.

This is an epic novel with a cast of thousands and adventures across and through many obstacles. I had trouble becoming engaged in this novel. The characters did not grab me. Jack started off being disgusting and lost my respect. Peter is being made to go on the adventure. I liked the adventure loving nature of Hannah but even she was going to avoid something else. So I found the character motivation lacking.

I got bogged down in the story and had to force myself to keep reading. There were some action scenes early on but I felt like I was watching action from a distance, not really drawn into the suspense. The action and suspense increased greatly near the end.

My greatest displeasure with the book was the many plot lines. There is Selena's story yet within that plot are narratives from usually two and sometimes three different places. Then there is the plot line involving Jack and Peter and Hannah. There are at least three different narratives there. About half way through the book we begin to see an intersection of all of the narratives yet still alternate narratives. Sometimes even the time period changes. Here are chapter numbers and the dates: 53-February 17, 54-March 2, 55-March 20, 56-March 3, 57-March 20, 58-March 24, 59-March 5, 62-April 13, 63-March 12. Not only did the narrative view points and locations change, so did the dates. That was just too much.

And this is a long book, over 750 pages. This work is likened to Tolkien's but his books are 350 to 450 pages. I think a better approach to this work would have been three books. First would be Selena's story, then Peter, Jack and Hannah's story, and then when their narratives combined. And these 792 pages are just the first in a series, we find out at the end. Another possibility would have been to have about 200 pages cut from this novel. There were descriptions and scenes I felt did not move the plot forward and could have been eliminated.

I agreed to read and review this book or I don't think I would have finished it. It would be a good choice for readers who like being immersed in an alternative world with many plot lines, lots of battles, alternating narratives, speaking animals, people who have healing visions, and much more.

Michael McCellan received his history degree from Yale, with an emphasis on the late nineteenth and early twentieth centuries. Since childhood, he has loved reading large canvas historical and imaginative fiction the most. He eventually realized there was a book he wanted to read that had not yet been written. That story became The Sand Sea. It is his first novel. He lives in California with his wife and their two daughters.

I received a complimentary digital galley of this book from the publisher. My comments are an independent and honest review. The synopsis of the book and author bio were provided by The Story Grid.
(My star ratings: 5-I love it, 4-I like it, 3-It's OK, 2-I don't like it, 1-I hate it.)
Posted by Joan Nienhuis at 6:12 AM

A picture is worth a thousand words. Your book is very attractive and getting a few reviews on usbookreviews dot com can really take your book to the next level.

I concur. I expected something far more refined from Story Grid.