The Impostors by Steve Benen 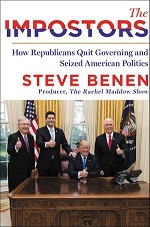 I read this book in my ongoing quest to understand the current political situation in the United States.

Benen says politics has evolved since 2008 to where the Republicans are now post-policy. They no longer care about evaluating evidence and then developing policy. He describes the post-policy thinking, “...what works, even during a crisis, is far less important than what's ideologically satisfying.” (Loc 541/7830) That means they'll vote for whatever promotes reelection rather than what is best for the American people.

Several examples are given where Republicans voted for a proposal when originated by a Republican but opposed essentially the same proposal when proposed by Democrats. Such was the case with the budget. During the Bush era, Republicans added trillions to the debt. During the Obama administration, “reducing the deficits they'd created was the only goal that mattered.” (Loc 4745/7830) With a Republican administration currently in power, we see the deficit again becoming larger.

One of the most telling events Benen recounts is one where Gingrich was discussing crime with a CNN host. Presented with statistics showing crime declining during the Obama administration, Gingrich said he would rather go with what people felt. Benen comments that false perceptions were more relevant than facts and reason. Statistics, Benen says, “are no match for what unprincipled politicians can get people to believe.” (Loc 5354/7830)

The book is very readable, even to this political novice. With many such insights, Benen has helped me understand the current political situation. I recommend this book to those who would like to understand how we Americans have come to the political situation we are in. Yes, the author particularly aims his critique at the Republican Party. Nonetheless, this book certainly shows how those governing today are failing our public interest.

Food for thought: “An approach to governance that rejects the value of independent evidence will inevitably fall.” (Loc 5687/7830)

Steve Benen is a producer on The Rachel Maddow Show and the author of The MaddowBlog. His articles and op-eds have appeared in The New York Times, Washington Monthly, The American Prospect, Salon.com and other publications. For his work on TRMA, he has received two Emmy Awards and has been nominated for three more. He lives in Vermont. Photo by Eve Benen.

I received a complimentary egalley of this book from the publisher. My comments are an independent and honest review.
(My star ratings: 5-I love it, 4-I like it, 3-It's OK, 2-I don't like it, 1-I hate it.)
Posted by Joan Nienhuis at 2:44 PM