Justice comes easy for these two. But forgiveness? That's another matter altogether.

Investigative reporter Rae Burke will do anything to find her missing sister-in-law, even if it means facing Liam McKade, a man who almost lost his life saving hers. A former DEA agent, Liam thought he could find peace at his Wyoming ranch, but he doesn't feel at home anywhere anymore. When the reporter who blew his cover on an important investigation inserts herself back into his life, he's less than thrilled. But Rae's keen investigative skills have led her down the right path – and directly into the dragon's mouth – leaving Liam no choice but to protect her.

As the danger increases, the past they both tried to flee catches up to them, along with the feelings they once had for each other . . . 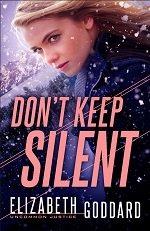 I enjoyed this romantic suspense. The setting of a winter ski resort was engaging. There was a good deal of suspense so the pace of the plot moved well. I felt the characters were developed well and there was a good balance of character thought and action.

I appreciated the red herrings sprinkled throughout the plot. I have to admit, I had my eye on the wrong guy as the villain more than once. The restoration of the relationship between Liam and Rae was done well. The initial tension between them is based on previous actions. I thought perhaps I had missed a novel in the series but the previous actions are eventually revealed in the narrative.

This is a good romantic suspense for readers who enjoy characters who have a history they must work through to renew potential romance while they try to find a missing woman and stay alive too. While there is some mention of God, the faith message is not a strong one.

You can read my reviews of the earlier books in the series: Never Let Go, Always Look Twice.

Elizabeth Goddard is the award-winning author of more than 40 romantic suspense novels, selling over one million copies. She was awarded the 2011 Carol Award and was a finalist for a Daphne du Maurier Award for Excellence in Mystery and Suspense. When she's not writing, she loves spending time with her family, traveling to find inspiration for her next book, and serving with her husband in ministry. She is a seventh generation Texan. You can find out more at www.ElizabethGoddard.com. Photo: Emilie Hendryx.